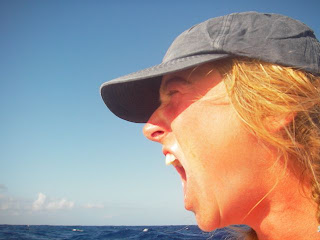 After I spoke recently at Google in Mountain View, CA, a Googler from the audience sent me an email with this thought-provoking opener: “As you can tell from my questions, I’m interested in the process of reducing stress by reaching that level of “zen acceptance,” as you called it. I’m not necessarily looking for an easy way to get there — I’m not sure there is an easy way. But it would be fascinating to find out the thought process you went through as you worked your way to zen acceptance (kind of like the 5 stages of grief?) Reading about what you went through may give people ideas of how they can create experiences for themselves (probably short of rowing across an ocean!) to work through a similar process toward the goal of zen acceptance. I really think this is an area that people can “train” themselves in, and there are so many mental and physical benefits that it’s worth spending some energy on.”

So I have duly spent some thought and energy on it, and although I think my answer still has some evolving to do, I’d like to post my thoughts here to stimulate some debate. Maybe you have a story to share so we can benefit from your experience? If so, please post it as a comment to this blog, so we can work on this together.

For me it was a combination of factors – and here I am talking about the Atlantic row in 2005-6. By the time of my 2008 row from San Francisco to Hawaii I had moved much closer to a state of zen acceptance – largely by doing things the wrong way on the Atlantic. I talk a lot more about this in the book that will come out on October 6 this year – Rowing The Atlantic: Lessons Learned on the Open Ocean. But for now, here is a summary of what I went through on my zig-zagging journey towards some lowly level of enlightenment:

1. Several months of creating endless frustration and internal conflict caused by fighting reality (“the weather shouldn’t be doing this,” “my shoulders shouldn’t be hurting” etc) until I realized that I could fight reality all I like, but reality wins!

2. Ditto when fighting the ocean. In the early stages I thought the ocean was being deliberately malicious towards me. I took it personally. Then I realized the ocean was just doing what oceans do. It wasn’t trying to teach me a lesson – it was just obeying the laws of physics. The ocean was doing its thing, and I had to do mine, i.e. just carry on rowing!

3. Demise of satellite phone – when my access to weather forecasts was cut off for the last 24 days of the Atlantic row, it ended the seesaw between two extremes:
a) good forecast –> expectations of good progress –> disappointment and more frustration;
b) bad forecast –> fear and anxiety –> forecast usually wrong anyway so fear and anxiety a needless waste of emotional energy.
It forced me to live in the present moment, and accept things exactly as they were.

4. Recognition of the perfection in everything. This created an attitude of positive thinking that became self-fulfilling – the clouds had a silver lining, because I had decided that they would! So I sought the positive in everything. e.g. when my satphone broke, I realized that this was my perfect opportunity to truly test my self-sufficiency.

5. The “Retrospective Perspective” – putting the present experience in the larger context of my life, and knowing that it would all be worthwhile in the end. It really helped when I learned to project myself into the future, and know that even the worst adversity would one day make a great story to tell my friends in the pub. (Hmm, not sure pubs are very zen. Enlightenment/sobriety evidently still a long way off!)

So if I was going to try and break this down into something analogous to the “5 stages of grief” that you mention, they might be:

1. Indignation that “it shouldn’t be this way!”
2. Frustration and anger as fight against reality escalates
3. Crisis and catharsis (yell therapy is good for this – and in the middle of the ocean, nobody can hear you scream…)
4. Grudging acceptance
5. Recognition that there is something positive to be found in every situation, and that the greater the suffering, the greater the learning. To grow you have to get outside your comfort zone, and getting outside your comfort zone is (duh!) UNCOMFORTABLE!

And that invaluable sixth stage…. telling the story over a pint of beer afterwards – which we can call celebrating one’s achievements, and saying, “Well, hey, haven’t I come a long way.”

Ocean rowing was my crash course in personal development. But how to replicate this in a non-rowing environment? To be honest, I don’t know. This is where I need you to help. What have you experienced that has pushed you to what you thought was your limit – only for you to continue beyond your limit and experience some kind of enlightened acceptance?

[Photo: on the ocean, no one can hear you scream….]

As those of you who have been following my Twitter feed will know, I am now in London for a couple of weeks of meetings and PR. At last Nicole and I have some breathing space to regroup and consolidate. The clock is ticking, and much remains to be done, especially around the launch of this year’s green initiative.

Meanwhile, packages have been arriving in Hawaii – tea tree oil, wet wipes, a newly-serviced Winslow life raft, Aquapacs. Work continues on my boat, in readiness for my launch on May 24.

For ocean rowing afficionados, there are two rows currently in progress you may like to follow. I am especially proud to link to Sarah Outen, who I have been informally mentoring for the last couple of years, and who launched her attempt on the Indian Ocean a few days ago. She is a fantastic writer/blogger as well as a mature and impressive young woman, so please check out her blog and join me in wishing her well.

And Oliver Hicks continues to battle his way through the Southern Ocean. Good luck Olly!

Are you Stupid or Not Stupid?

I’d like to make special mention of an important film I went to see last night at its premier in London. The Age of Stupid has been tagged the natural successor to Al Gore‘s An Inconvenient Truth and Leonardo DiCaprio‘s The 11th Hour – moving the emphasis from information to action. Powerful, informative, potentially life-changing. Recommended. More than recommended. Positively encouraged, urged, compelled. Please go! (Have I made my point?!)