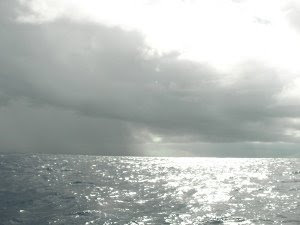 Faith Miles is what I call the distance rowed that might not get me
closer to my destination, but it's putting me in a good position to take
advantage of helpful winds at a later stage. On the Atlantic, I had to
head south to pick up the trade winds that helped me over to Antigua.
The old sailing lore is "Sail south until the butter melts, then turn
west."

Leaving from San Francisco on Stage 1 of the Pacific row I spent 6 weeks
zigzagging down the California coast and actually wondered if I was
going to land up in Mexico, before I finally managed to break free and
pick up the trade winds that assisted me to Hawaii.

On both those crossings I got used to what Leo in our podcasts calls
"reverse progress". I spent a week going backwards at one stage on the
Atlantic, and several times got pushed back east between San Francisco
and Hawaii. But neither instance was too bad, because I knew I was
gradually being going to end up in the helpful trade winds.

This passage is rather different. I am under no illusions that I can get
across the Equator by waiting for trade winds to kick in. I don't have
that "Get out of jail free" card to play here. I keep getting pushed
around by winds and currents – north, south, east, west – and I'm just
not sure if I'm going to win through in the end.

A few times recently I've started to feel like, enough already. This is
my 61st day at sea, and there are still nearly 1,000 miles to go. I'd
rather be heading there (wherever "there" is) more directly. I'd like to
be able to predict an ETA and get things organized for landfall – like
where to store my boat, book flights for Nicole and Ian, sort out
accommodation and so on.

But that is the short cut to insanity. Whenever I catch myself thinking
about the ETA – whether optimistically or pessimistically – I bring
myself up short. At this stage it's just unknowable. I have to keep
myself purely in the present, and focus on the process. What is going to
get me there? Rowing. Not wishing, calculating, or yearning. Just
rowing.

Focus on the process, and keep the faith.

[Blogger's note: I feel like I ought to apologize for going on about my
navigational challenges. But there really isn't much else to report. No
more wildlife sightings, no exceptional audiobooks. If you'd like to
take advantage of this hiatus to ask me some creative and unusual
questions, then please do so! Just bear in mind that I am having to do a
lot of rowing, so time for blogging is more restricted than previously.]

[photo: Typical ITCZ. Today's video RozCast (see YouTube) was recorded
during a squall. With the reduction in resolution necessary to send
video, I don't know if you'll be able to see the rain dripping off the
bill of my baseball cap, but I can assure you it was most definitely
raining!]

Today I nearly, so nearly, got back to 4 degrees 30 North. I was within
half a mile when a thunderstorm overtook me and I decided it was
probably prudent to beat a temporary retreat to the cabin. As I write
the rain is still pouring and I am being pushed WNW. My direction of
drift is very difficult to predict – it seems to be a delicate interplay
of strength of wind vs strength of current. What appear to be very
similar conditions can produce very different results. This is why, even
with the best weather information in the world, ETAs are a totally
pointless exercise.

UncaDoug – sorry, no crescent moon sighting. The big black thundercloud
has blotted out everything. I can't see a single star, and it's darker
than a witch's armpit out there!

Eco Champ of the Day is Naomi in NY:
"Today I decided I'll wash out my plastic "take-out" container from the
office cafeteria and reuse it for lunch here every day from now on until
it falls apart. And the fork, too. I will not throw away another plastic
fork, spoon or knife. I've been getting these plastic take-out
containers and forks/spoons/knives virtually every day at the cafeteria
for years and throwing them away DAILY. Never again. (I met a guy on the
train a while back who told me that if we used just one less napkin a
day the impact on the planet would be profound.) Thanks for your videos
… where I learned that the overuse of PLASTIC is the number one threat
to Mother Earth. I actually "knew" this, but it is in seeing you and
hearing you as you DO this amazing rowing thing that it's finally gotten
through to me to the point of action."
Thank you Naomi! I am sure other people in the cafeteria will see what
you are doing and hopefully follow your example – and this is how we
change the world. I'd urge everyone else to think twice about using
anything that has the adjectives "disposable" and "plastic" applied to
it. You might dispose of the plastic, but the Earth can't!

Thank you to all my lovely Rozlings for the ongoing comments – comments
from regulars and occasionals are all welcome. Especially over these
tricky weeks ahead, I appreciate your support and encouragement all the
more.

A: Roz, Did you weigh yourself before stage 2? How much weight do you
expect
to gain or lose on your journey?
A: I weighed 137lb before I set out – which is more than I like to
weigh. I was having to buy roomier clothes. On the Atlantic I lost about
30lb, weighing 104lb when I arrived. Then regained it, of course.
Pacific Stage 1 I lost a little less, weighing 107lb on arrival, with a
bodyfat percentage of 10%. This time around – not sure. My feeling is
that I'm losing less weight, but it's hard to tell. I'll weigh in when I
get to Island X and let you know.

Q: How are your birdbrain friends doing?
A: See last week's blog for Day 56. They've gone.

Q: How deep is it where you are? Very?
A: Yes, very. Probably about 2 miles – but you're in a much better
position to find out than I am! I think the information is available on
the RozTracker. I can't access the internet from here, so I'll have to
leave it to you to research this question.