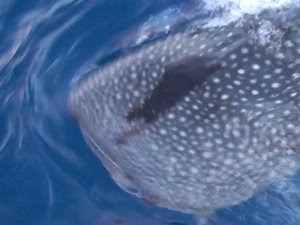 Gregory asked me: Where do you see yourself in 15 years?

Well, if I'm not still in the ITCZ, which at the moment looks all too
likely, I'd like to imagine that my life would look something like this.
Adventure will still be my watchword, and I'll still be seeking out ways
that I can be useful to the causes that I care about – the raising of
consciousness, and working towards a sustainable future. But I suspect
that my ocean rowing days will be far behind me, and I'll have found a
different calling that is still in tune with my values. Or, in fact,
three callings.

First, if the resources become available, I'd like to create a
foundation to promote my causes. We've already started to sketch out
plans for this, but at the moment it has no source of funding. The
foundation would support people who feel they have a unique contribution
to make, and an award would involve mentoring and guidance as well as
financial support. It wouldn't matter what their project was, provided
that it played to their personal strengths, and that they were willing
to share with everybody the experience of pursuing their passion –
through a blog, book, documentary or other form. The emphasis would be
on the journey towards their goal – I know from first hand experience
how inspired people get when they see someone on a quest to make
themselves better people, and the world a better place – and I'd like to
help the foundation's beneficiaries reach as wide an audience as
possible to spread those ripples of inspiration.

Second, I suspect that in 15 years much will still need to be done
globally to create a sustainable future. I hope that much will have been
achieved, and that sustainability will have stopped being a cause and
started to be an intrinsic part of every aspect of human activity. In a
perfect world, every consumer choice, every architectural plan, every
journey, would be based on principles of sustainability. But in the real
world, I think there will still be work to do. And I'd like to be a part
of that work, in whatever way I can be of most service.

Third, I'd like to still be having my own adventures, although in my
mid-fifties they might be rather less strenuous than rowing across
oceans. I'd like to be traveling the world giving lectures,
presentations and book signings, and using those opportunities to
explore places I haven't yet seen. I'll be referring back to my list of
10 Adventures Before I Die (see blog for Day 23) – and in 15 years time
I'm sure I'll have a lot more ideas besides. There are so many different
ways to experience this world, and I'm greedy to try as many as
possible. I'd like to live in different countries and different
cultures, and soak up the sheer joyous variety of them all.

We live in uncertain times, and I have no idea what the world will look
like in 2024. But I feel well equipped for whatever the future may
bring. After many years of being rather confused about life, not really
knowing what my values and priorities were, I now have a much better
idea of who I am and what makes me happy.

So I'm confident that whatever I'm doing, I'll have found a way to make
sure that it's fulfilling – and fun!

[photo: absolutely nothing photo-worthy today. Not even a sunset due to
the grey weather. So here is a picture of the head of the whale shark as
I first saw him – from above the water. He's got a big black mark on the
back of his head – I'm not sure if this is a scar or just the way he's
made. Ideas?]

I never quite got the hang of today. I made some useful progress south,
now having achieved the most southerly point of the voyage so far (but
already being pushed north again), but it was slow progress against a
succession of squalls and showers and occasionally headwinds. This
morning was fine, but for most of this afternoon my bit of the Pacific
was dank, grey and dismal, with a steady patter of rain. Tonight is
pitch dark yet again. I can only just tell where the horizon is – the
sky is just one shade of black lighter than the ocean. I'm not out of
the ITCZ yet.

If my adventure has inspired you to have an ocean-going adventure of
your own, check out the Oceans Watch website at oceanswatch.org. I met
the OW folks when I was in New Zealand on a speaking tour last year, and
they are a great contact point for boat-based research projects in the
Pacific. Bon voyage!

A special hello today to Roz's Regulars, whom I don't always acknowledge
but I always look forward to your comments – notably Joan, Doug,
Antonio, Gregory and Sindy.

Joan – thanks for letting me know about the study that found that
cursing/swearing is good for your health. I must be very healthy indeed
these days then, as the ITCZ is giving me ample opportunities for a
"workout"!

Laurey Masterson – thanks for the lowdown on the literati of Asheville.
I really don't think we can fit it into the book tour this time around,
but I've got friends in NC so maybe we can arrange something for next
year. This brings me to the other part of your comment – yes, I am
already affiliated with 350.org, having met Bill McKibben at a
conference earlier this year, and the reason we have to cut the book
tour short is that I have to dash over to London in order to leave from
Big Ben to march to Copenhagen – leaving on the 350.org international
day of action, October 24. There will be more details coming soon on the
pulltogether09.org website on how people can come and join us.

Aquaphoenix – thank you for the lovely message. Wise words, and I
couldn't agree more!

Anna – great questions. Received them too late to answer today, but will
tackle them tomorrow. And I wish we WERE sat in a Leeds wine bar over a
glass or three! Sebastian in SF and stormcloud – have also saved your
question for a future blog.

Q: What time zone are you in?
A: I am in just about the remotest time zone there is. One hour behind
Hawaii, 4 hours behind Pacific Standard Time, 12 hours behind British
Summer Time, or 11 hours behind UTC. But hopefully in the next few weeks
I'll be crossing the International Date Line – and then I'll be in
tomorrow, and ahead of you all!

Q: What kind of medicine did you pack on the voyage?
A: Every kind! Honestly, my first aid kit is huge, as it has to cover
every eventuality. I've got antibiotics, bandages, burns dressings,
suturing kits, sprays, creams, ointments, pills, potions – everything
bar a stretcher! All put together by my good friend Dr Aenor.

Q: Is whatever you have for sun protection good enough and what do you
use?
A: Yes, it's excellent. Green People organic sun lotion. Seems effective
way beyond its SPF – and as I use so much of it I'm happy that what I'm
absorbing into my body is organic. I've used 4 x 200ml tubes so far
(200ml = 6.8 fl oz).