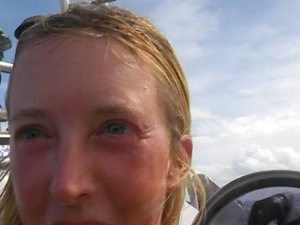 Another strange day in the ITCZ. No rowing this morning – the sea anchor
was out while the wind blew from the southeast. It's pretty boring being
on a rowboat when you can't row – there isn't a lot else to do. And
I didn't want to just sit and dwell on how many miles I was losing.
So after tinkering around a bit, writing a couple of emails, I decided
to take on a major challenge – to brush my hair.

If you've never tried leaving shoulder-length hair unbrushed for two
months, during which time you also take frequent swims in salt water,
toss and turn in a constantly moving bed, spend your days outdoors in
brisk sea breezes, and swivel your baseball cap around to try and shield
your face from the sun… then I don't recommend it. It leaves your hair
looking like a thatched roof and feeling like an oil slick. I had put my
hair in braids shortly after leaving Hawaii, but by now the two braids
were more like two dreadlocks. There is a very good reason I'm always
wearing a hat in photos.

It took me half an hour to persuade my hair that it was indeed made up
of individual strands rather than being just a solid mass of coagulated
straw. And having got that far, I thought I may as well go ahead and
wash it too. And condition it. And give it a lovely thorough rinse in
generous amounts of fresh water. By the time I had done all this, I had
quite satisfactorily managed to pass an hour, and felt like a new woman.
Clean hair is surprisingly good for morale.

By mid afternoon the wind had backed around to the East, so it was in
with the the sea anchor and out with the oars. It's slow going – the
wind still isn't exactly helping me – but I've managed to claw back a
few of the miles south lost over the last two or three days.

And having said that, I'm going to cut this blog short. The sun is
setting – I know that because my GPS has just this minute switched over
to its night-time color scheme – but I'd like to get in a bit more
rowing, so I must go. I have to take my chances while I can.

[photo: Scary. This is what was hiding under the baseball cap.]

We haven't yet had a chance to set up the email address for the Larabar
bookmarks – see yesterday's blog. I believe it is going to be set up
tomorrow when Evan gets back to the office in Hawaii. So patience
please, kind Roztafarians!

Laurey from Asheville, NC – I am absolutely all in favor of supporting
independent booksellers and local businesses. Unfortunately Asheville
won't be on my book tour – it's up to my publishers, not me, to decide,
and I believe that so far they are focusing on the big cities – New
York, DC, San Francisco, Portland OR, Seattle and Boston. Maybe LA. But
thanks for the reminder to think global, buy local!