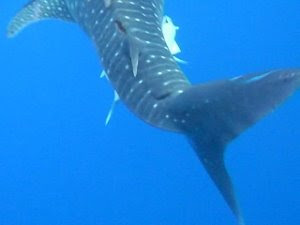 I very nearly got to it last night – just a third of a mile away. But by
this morning I'd drifted northeast, further away from it. I slogged into
a headwind all morning, making less than 3 miles in 5 hours of rowing,
but finally making it to the south side of the line.

But my sense of achievement was short-lived. This afternoon the headwind
strengthened until I had little choice but to put out the sea anchor,
and watched the GPS screen as my hard-won miles were slowly eroded away
until once again I was north of 4 degrees 30 North. My route for the day
looks like a big looping letter J, last seen heading northeast, directly
away from Tuvalu and back towards Hawaii. Sigh.

The day was enlivened, if not enhanced, by having to go over the side.
This was my first swim since the glom-fish now identified as a remora
attached itself to my right buttock a few weeks ago. I'd been none too
keen to renew his acquaintance, but I didn't have much choice. The
tripline to the sea anchor had got itself snagged on the towing eye on
the prow of the boat, where the main sea anchor line is permanently
attached. I managed to reach over and grab hold of the tripline from the
cockpit, so I would have been able to pull the sea anchor back in, but
my worry was that if I left it as it was the tripline would eventually
chafe through and break – and that would be very bad news.

So, in I went. And yes, I got glommed. Eugh. They seem to go for the
thighs and buttocks. Obviously not chest men. But whatever part of me
they target, I wish they wouldn't. It tickles in a rather sinister way,
and makes me feel quite violated.

As I write, I am still on the sea anchor, the wind still blowing hard
from the southeast and a succession of black squalls passing overhead.
I'm sitting in the cabin, listening to the rain drumming on the hatch
and watching the little arrow on the GPS screen. I am going the wrong
way, but for now, there is nothing I can do about it. Except maybe turn
off the screen.

In Alchemist-speak, I guess the next few degrees of latitude will be the
part of my quest where I am "sorely tested" (see yesterday's blog).
Unlike the boy in the book, I doubt I'll be able to talk the wind into
helping me. But what I can do is "master the lessons we've learned as
we've moved towards that dream" – in my case, not to build up hope
(leads to disappointment) or anxiety (leads to despair). I try not to
think ahead, as it tends to lead to thoughts of "How will I ever get
there?" but to focus on the positive, doing what I can, day after day,
to reach my goal, and trusting that I will get there – all in good time.

[photo: Last of the whale shark photos – appropriately enough, his tail,
plus his own fair share of glomming remora fish]

A ray of sunshine on a rainy day – a personal message from Paulo Coelho,
posted as a comment on yesterday's blog:
"Dear Roz
Nicole just wrote me about your adventure – in fact, a creative way to
raise consciousness. Congratulations for being who you are, and thank
you for your comments on my book.
Much love
Paulo"
Needless to say, I am totally starstruck. Overwhelmed. Gobsmacked.
Chuffed to bits. How weird and wonderful – this web of connections being
woven from a little rowboat currently sitting under a big black cloud in
the middle of the Pacific.

Nicole emailed me the first review of my book – and it's a goodie! "Bold
and invigorating" – great stuff! As blurbs and book tour take shape, the
book seems more and more real. I've derived so much pleasure, and
learned so much, from books, it would be wonderful to give something
back. I really hope that a few lives will be touched by my modest
contribution to the world of literature.

And, dearest Rozlings, I'd like to ask for your help. All copies of
Rowing The Atlantic that are pre-ordered on Amazon will get counted
towards the best-seller lists on the week of publication (October 6). So
if lots of people pre-order, there is a chance that I might get into the
Top 50 bestsellers that week – which in turn generates more sales. So if
you would be so good as to spread the word amongst your family and
friends, ask them to buy copies for themselves and as Christmas
presents, I would be most grateful.

As an added incentive, if you can email me your acknowledgement from
Amazon, I'll send you one of my special, signed Larabar bookmarks. I'll
probably munch my way through around 400 Larabars this voyage, so jump
in soon and reserve yours while stocks last! We'll set up a special
email address for this – I'll confirm it tomorrow.

Eco Champs of the Day – TUVALU! Committed to being 100% solar powered by
2020. If they're still here and not underwater.

Q: Roz, it looks like you will be passing very close to Baker Island and
Howard Island, which are currently about 270 miles to your SSW, directly
between you and Tuvalu (you will obviously be closer by the time you get
this). They are both uninhabited, but if you happen to see one of them
by chance, would you consider making a stop just to go for a walk?
A: No, absolutely not. Nice in theory, but no way in practice. I doubt
that either island has a nice convenient jetty, so I'd have to beach my
boat. Too high a risk of damage. A walk would be nice, but not at this
price.

Leave a Reply to Joan in Atlanta Cancel reply