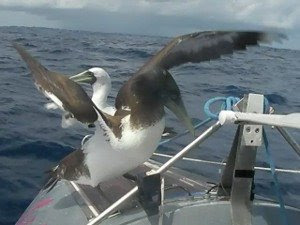 RozTracker junkies might have noticed that today I've dropped like a
stone, heading due south. Wind and currents were conspiring to help me,
so I've made the most of the opportunity. I'm keeping my options open
for either Tarawa or Funafuti, and heading south is the best way.

I asked Mum to do some research for me by reading through the blog of
Erden Eruc, who rowed from California to Papua New Guinea in 2007. He
didn't mean to row to PNG – he wanted to go to Australia. So if Erden
managed to miss something as big as Australia, you get some idea of how
difficult it's going to be for me to hit a teeny weeny little coral
atoll.

I read the extracts from Erden's blog that Mum sent me, and it was not
encouraging reading. He got to 7.5 degrees North in mid-November 2007,
at 159 degrees West, heading happily for the Equator. Then he ran into
the counter current. And the ITCZ. He crossed in the International Date
Line in late January 2008, still 3 degrees north of the Equator.

He finally crossed the Equator – wait for it – on May 8, 2008. SIX
MONTHS LATER! By then he was at 144degE, nearly 3,500 miles west from
where he first encountered the conditions that I am now facing. Eeek.
And that despite putting in some brutal 18-hour rowing days.

Of course, winds and currents are different every year. My boat is a
different design from Erden's so may hold its course better (or worse).
He may just have been really unlucky. I might get lucky (or unluckier).
Only time will tell.

Mountaineers say that climbing the mountain is the easy part – it's
coming back down safely that's the challenge. I'm starting to feel the
same way. Anyone can set out to row across an ocean (although funnily
enough, not many do) – it's making landfall that's the tricky bit. It's
going to take careful navigation, likely some hard rowing, and most
definitely an enormous amount of luck.

[Photo: Birdbrain booby getting in a flap on the poop deck]

I was really pleased I was able to make so much progress south today.
Problem is, I don't fully understand why! I thought it must be because
the wind from the East and the current from the West were equally
balanced so I could just kind of navigate down the middle. But now the
wind isn't blowing at all – dead calm out there – and yet I'm heading
SSW, which is good, but mystifying. Blows my theory about the
counter-current.

I don't like it when there's no wind. Whether on dry land or sea, I find
a good strong breeze bracing and energizing. Combined with the heavy
overcast and frequent showers today, the calm conditions feel rather
oppressive. Plus the wind carries away the pungent pong of the poop deck
– so without it the smell hovers in a cloud around the boat. Pheweee.

I shot some video of the boobies today, behaving in typical birdbrain
fashion. Rather amusing. Watch out for it in tomorrow's installment of
my Pacific RozCast on YouTube!

Mum is having problems viewing the RozTracker. Is anybody else having
problems, or is the gremlin infestation local to Cookridge, Yorkshire?!

I've got a lovely blurb for my Atlantic book (imaginatively entitled
Rowing The Atlantic) from the wonderful Lynne Cox, author of Swimming to
Antarctica. She writes:
"It's a grand adventure, mind boggling, inspiring, and a book that I
just couldn't put down. A fantastic read!"
Thank you Lynne! (The book is published by Simon & Schuster on Oct 6,
but is available now for pre-order on Amazon.com. Errr, hope I make
landfall in time for the book tour!)

UncaDoug – no wiggling westerlies today – just streamlined southerlies!
Alas, your idea about the wind generators is probably not practicable.
Great in theory, but they would have a bad effect on my boat's center of
gravity, and after my washing-machine simulations of 2007 I'm very aware
of keeping the Brocade bottom-heavy. Liked your thoughts on the
collective noun. Booby Nights made me laugh – but I'd rather be having
Boogie Nights!

Sindy – no, not scared by the squalls. They're just inconvenient as I
have to take down the sun canopy because of the strong winds they
generate. But at least they do wash the solar panels on the poop deck –
like going to the carwash!

Aquaphoenix – thanks for the Emerson quote. I hadn't heard that one
before.
And Gregory, thanks for the Churchill quotes. He's one of my very
favorite quotables! Didn't notice the tsunami, so I guess it must have
been not much more than a ripple by the time it got here…

Heather from Wiggly Wigglers – thanks for the comment, and the awwwwful
joke! Let me know if you decide to do a Wiggly Roz special. I would be
honored!

Ami – spooky! I was thinking of you just the other day too! NY – sounds
exciting! I'm probably going to be in Portland in October on my book
tour, but will be in NY too, so hope to see you in one or the other!

Q: Are there any similarities between being a consultant (or a
solicitor, for that matter) and rowing across the Pacific?
A: I never practiced law, so I wouldn't know about being a solicitor. As
for management consultancy vs ocean rowing, the project management
experience is really useful in the preparation stages. I couldn't manage
without my spreadsheets to keep it all organized. But when it comes to
the rowing itself…. No, not so much!

Q: Roz- what do you do about storms?
A: Retreat to the cabin, hunker down, and wait for them to pass. But it
hasn't been an issue on this leg of the Pacific. Long may that last!