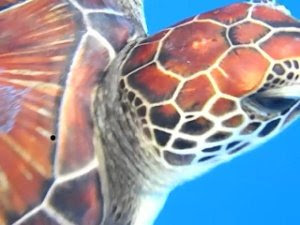 Turtles are my favorite creatures. If I had a totem, I would want it
to be this. They seem like old souls, wise and wizened, serene and
gentle as they wing their way through the underwater world. I've done
quite a bit of scuba diving, and a turtle sighting always made a dive
special.

So I was very, very, VERY excited to see a turtle today.

After waking to a rough, grey morning with winds over 20 knots, once the
sun rose the conditions quickly calmed down until by mid-morning I was
well and truly in the doldrums. Through the calm surface of the water I
could see that there were a good number of mahi mahi swimming around my
boat so I decided to do some underwater filming. As I leaned over the
side to submerge my Xacti waterproof camera I came face to face with a
turtle.

He was small, only about 18 inches long, but very pretty, with gorgeous
markings on his head. He swam several laps of my boat, staying close to
the hull, a small entourage of fish following him like a gaggle of
pageboys attending on a monarch. He continued his circumnavigation of
Brocade for around for about 10 minutes in all.

I didn't do a great job of filming him – it's not easy from a rocking
boat to accurately aim a video camera at arm's length at a small and
moving target – and he also kept getting just too close, so I've got
some great shots of his eye but not many of his whole body. I'd be very
happy if he came back to visit so I can try again. I'll post another
picture of him tomorrow with his entourage of acolytes.

The rest of the day passed uneventfully. The sky was overcast, the ocean
calm, the wind non-existent. Even Birdbrain the booby was
uncharacteristically quiet. As I type this the ocean is so silent that
all I can hear the occasional splash of a mahi mahi jumping. On a night
like this the ocean seems very large, and land very distant.

My course today has been rather erratic as conditions have changed. For
the morning and into the afternoon, such wind as there was came from the
SSE, which was not helpful. But towards the end of the day I was able to
resume my southwards progress.

Today's new video features Birdbrain the Booby and friend in a bit of
slapstick action on the poop deck. Do check it out on YouTube!

I've been pondering on the collective noun for my loyal blog readers.
Rozlings sounds nice, but I am a little embarrassed to have my name
included in the noun – seems a bit egotistical (that Yorkshire
upbringing again!). I thought of Rowsters – but is that too generic?

Other suggestions that I'm afraid I have to turn down:
Rozzers? In Britain that's slang for police. Not quite the connotation I
want…
Roz's Rooters? Really wouldn't work in Australia, where it means… well,
just not suitable. Trust me.
Booby Boosters? Sounds like a new kind of bra.
Roz's Roosters? Hmmm!
Rozcals? As in rascals. I didn't get it at first… might be a bit TOO
clever.
So maybe Roz's Rowsters?

Actually, looking through the most recent comments, Rozlings seems to be
catching on very quickly. And Joan, I know exactly what you mean when
you say it's reminiscent of Dame (!) Edna Everage and her Possums. So
maybe I'll just go with the flow on this one. Rozlings it is. Hello, my
little Rozlings!

Eco Champ of the Day!! A big green hello to Sharon in Toronto! She
posted this comment below, full of great ideas and inspiration. It
almost makes me wish that there would be more garbage strikes – it would
be a big wake-up call for a lot of people to be brought face to face
with their accumulated trash. When it is whisked hygienically away it is
easy to forget that on a finite planet there is no "away".

"Here in Toronto Canada, we are on day 24 of a garbage strike, which has
led to public parks and sides of the road becoming popular dumping
grounds. Determined not to add to the HORRIFYING impact all the sudden
garbage will cause at the end of the strike, my son and I have set out
use, reuse and vaporize what we can.

So far we've started a garden compost to take care of our food scrapes,
we're crafting daily, including an army of robots out of tin cans for
the neighbourhood kids, tote bags out of our dog food bags, recycled
newspaper for 101 paper mache crafts, a box to hold our old newspaper
made out of old newspaper, iPhone and iPod holders out of juice boxes,
chip bag purses and bracelets and the list grows. We are determined to
make this strike a chance for our family to grow green. So much so, that
we've informed all our family and friends that any gifts for occasions
this year will be homemade and recycled.

Reading your blog every day is an extra boost for those times when I
just want to toss an old egg carton, or when the thought of churning the
yucky mush that is becoming our compost makes me sick… I think… its
the least I could do for this planet that has given me so much.

Thank you SO much for opening up your adventure to help the rest of us
discover our own."

Naomi in NY – delighted to hear that I might have influenced you to
resurrect your dream of walking across England next year. Sounds
brilliant! And/or you could come and join us this October as we set off
to walk from London to Bonn, from where we take the train to Copenhagen
for the COP15 climate change conference. Although maybe not the ideal
time of year….! On second thoughts, maybe I'll come and join YOU next
summer for part of your walk – sounds like a much better/warmer idea!

Gregory – yes, women can be knighted, although instead of becoming "Sir
Whatever" women unfortunately get to be "Dame Whatsit" – which
immediately makes them sound like one of Cinderella's ugly sisters in a
pantomime. Anyway, I don't think that's going to be an imminent worry
for me! And Joan – I loved your idea about the Dames Directory. Wouldn't
that be cool?! Dame Judi, Dame Maggie, Dame Ellen (Macarthur) – and of
course my favorite, Dame Edna!

Robert – yes, currents do change all the time. See the latest from
weatherguy at the end of this blog for what I can expect to face in the
weeks ahead. Joan, you're right, it IS confusing. An easterly wind comes
from the east. An easterly current comes from the west. Don't ask me
why!

Susan – glad you're enjoying the Tweets. When I saw the turtle this
morning, I was so happy to be able to share the good news, hot off the
press!

UncaDoug – GPS updates to the RozTracker are automatic. I'm puzzled when
you say that posts are delayed. What kind of posts? Blogs? Tweets? Or
all?