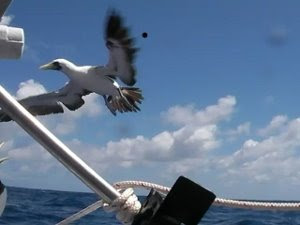 Today has been a day of mixed fortunes. I woke to find a) that it was
raining, and b) that most of yesterday's meager southerly progress had
been lost overnight. Wind and currents had pushed me back to the north.
It wasn't a flying start to the day, but what can you do? Just get out
there and start rowing.

And row, row, row is what I have done all day, trying to ignore the fact
that I have achieved little more than stemming the northwards drift. I
had got used to knocking off a degree of latitude every 3.5 days on
average. But I've now been struggling towards 6 degrees north for 5 days
already, and as I write I'm still not there.

Usually I look forward to the end of each rowing shift, when I update my
logbook with latitude, longitude, and miles achieved closer to my goal.
The last normally gives me a sense of satisfaction and achievement. I'm
used to doing about 2 knots while I'm rowing, so a 2 hour shift would be
4 miles, or a 3 hour shift 6 miles. But today I've been rowing 3 hours
to gain 2 measly miles, and the sigh of satisfaction has been replaced
with a sigh of resignation.

But, strangely, spirits are good despite the lack of forward progress.

I've found that the art of not going crazy on the ocean comes down
largely to thought management. Despairing thoughts of "am I ever going
to get there?" or "why is this so hard?" are not helpful. So I've been
deliberately diverting my thoughts in a different direction.

If I was some kind of enlightened being, no doubt I would do this by
using meditation. As it is – and this is rather an embarrassing
confession – I've been using Jeffery Archer.

For non-British readers who may not be familiar with Jeffery Archer, he
is a British author producing Grisham-esque novels. However, his
reputation is based less on his literary achievements and more on his
general notoriety. He is a former Member of Parliament with an
unfortunate reputation for exaggerating his own achievements. He was
exposed as having an affair (or was it that he slept with a prostitute?
Or both?) and spent some time in prison for something or other (look on
Wikipedia). He has gained and lost several fortunes, and originally took
to novels to write his way out of bankruptcy.

But he is actually rather a good writer, and "Prisoner of Birth" is a
real page-turner (of whatever the auditory equivalent is). It's the
first of his books that I've read, and I wish I had more. It's a chunky
hunk of a book that I just haven't been able to put down – and as the
rule is that I can only listen to audiobooks while I'm rowing, it's been
very effective at keeping me plugging away at the oars today through
thick and thin, earbuds in, northwards and southwards, fair weather and
foul.

[photo: this isn't Birdbrain – it's another booby who from time to time
tries to land on the poop deck. But Birdbrain is having none of it. This
bird is obviously further down the pecking order… and I'm somewhere
below that.]

There have been several downpours today. I try and row my boat into the
path of any approaching squalls, as they are very effective in washing
away booby bird poop. But the poop deck doesn't stay poop-free for long
– Birdbrain is still in residence, so there is a never-ending supply.
Our reluctant truce continues – it really is very Life of Pi – we just
ignore each other most of the time. He has his territory on the poop
deck and I have mine in the rowing cockpit. He poops, I row, and so life
goes on.

As I write the weather/current conditions seem to be improving, and my
direction of drift appears to be SW rather than NW. But I'm not taking
anything for granted just yet…

Thanks to the sheer chutzpah of my amazing friend and Lemon Lady Karen
Morss, Nicole is now in email contact with J Maarten Troost, the author
famous for his books about the islands and residents of the Pacific. He
has already contributed some very helpful input about potential
destinations – which is very much appreciated. Thanks, Maarten!

Thank you to all who have posted comments on this blog and on the
Facebook Page. I feel like I should have a collective noun for all you
wonderful people who are supporting me as I paddle, but inspiration has
deserted me. Any ideas?