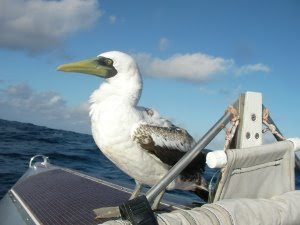 Picture the scene: a slightly crazed-looking naked woman is waving a red
dustpan in your face and yelling all kinds of curses, mostly ending in
"off" and none of them repeatable here. Which of the following would you
think is the most likely interpretation of her intentions?
a) you are most welcome to land there and poop all over my solar
panels
b) let's play fights – your beak against my red dustpan
c) go away and never darken my fore cabin again.

Sigh. I would have thought it was fairly obvious. But Birdbrain here
wasn't getting the message. He just squawked back petulantly, slithered
around a bit on the panels as I tried to scoop him away with the
dustpan, retreated beyond the reach of my arm + domestic implement, and
then went back to preening his feathers. After the first dozen times
this was getting a bit old. I obviously wasn't going to manage to train
him not to land here. I needed a better strategy.

Aha. I had an idea. I would string several strands of rope across the
roof of the cabin, from the cleat on the prow to the small raised
triangle of the sun canopy's support. The rope would be a couple of
inches above the solar panels and would prevent the booby from landing .

I lashed three lines together, with a large loop at the end. After many
failed attempts, I finally managed to lasso the cleat and tied off the
three ends of the line to create a cat's cradle of narrow triangles. As
I worked, the booby tried to kept trying to land on the roof. Another
booby turned up and the two of them squabbled loudly like disagreeable
children. I kept trying to shoo them away but they just weren't taking
the hint.

At last my booby trap was ready. I stood back and admired my handiwork.

The booby circled and landed, totally disregarding my deterrent. His big
webbed feet splayed across the rope, his weight pinning it down to the
solar panel. He pooped triumphantly. I turned away in despair, just in
time to see the other booby land on the roof of the other cabin, and
deposit a copious white puddle across the solar panels there.

Sigh. I swore, and went back to my rowing, trying to listen to "Dreams
From My Father" by Barack Obama, his chocolatey voice all but drowned
out by the squawking, pooping, pestilential vermin sitting on the cabin
behind me.

P.S. Since I first drafted this, a total of 3 boobies have now taken up
residence on my boat. I've taken the dustpan to them times beyond
number, but they just circle and come back again. They jostle noisily
for position on the fore cabin roof, balancing precariously between the
strands of rope. They do everything noisily, in fact. Every large wave
is accompanied by a commentary of discordant squawks, as if they'd never
seen a wave before in their lives. They just never shut up. It's driving
me absolutely nuts. Oh no, as I type this, one of them has just
discovered the cockpit. It is standing on my rowing seat. I hate to
think what stinking state the boat is going to be in by the morning. To
say that I feel intruded upon would be a gross understatement. Errgh, I
can smell their poop from here, inside my cabin. Forget intrusion, more
like violation. It's just not even funny any more.

Slow progress today. When not taking swipes at boobies with a dustpan
I've been rowing hard, but have made a scant 20 nautical miles. I'm not
sure why progress is so slow – the wind has been fairly brisk and I'm
not aware of any adverse current here. Just one of those things. But at
least the miles have been in the right direction, which may not continue
to be the case as I get closer to the Equator.

Nicole tells me that today I was featured on bing.com's home page. Bing
is the new search engine from Microsoft, launched to compete with
Google, and apparently it's doing rather well. Today's homepage features
an image of a kayaker going over a massive waterfall. The image changes
every day and there are various spots on the image to click — if you
click on the kayak it says, "Some people row boats over waterfalls; Roz
Savage rowed one across the Atlantic. Click here to view videos of her."
and it takes you to a gallery filled with my videos. Cool!

Correction: I mistakenly said that Jason Lewis had a crewmate for his
pedalboat crossing from Hawaii to Tarawa. In fact he pedaled alone for
this stage of his circumnavigation.

A special hello to Sarah, Bill, Jack and Grace! From my big duck pond!!
And also to Anne and Pete – lovely to hear from you!

Q: Have you seen the green flash at sunset yet, or are you too low in
the water?
A: No, I haven't seen it, although I keep looking. Generally I'm too
low, and/or waves are too high, and/or clouds on the horizon get in the
way.

Q: Roz, do you sing, hum or whistle while you row?
A: No, not much. Although I might do when I get tired of audiobooks and
take to music instead. But believe me, 1000 miles from the nearest human
ears is the best place for me to sing. My singing would make the boobies
sound like Mariah Carey!