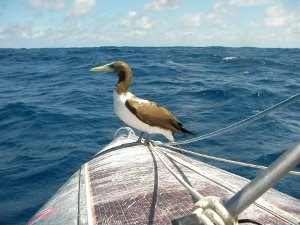 Am I overreacting to the battle of the boobies? I wondered to myself
last night as I tried to get to sleep, still very aware that my
uninvited houseguests were on board and speculating as to what state I
would find the boat in the morning. After all, I've endured much worse
things at sea. I've put up with injuries, capsizes, running out of water
and equipment failures galore. What's the big deal about an infestation
of large smelly, noisy birds?

But actually, I decided, my resentment of their intrusion was justified.
After all, this boat is my home. And how would YOU feel if three
complete strangers barged into your living room without so much as a
by-your-leave, and proceeded to argue loudly with each other, shoving
each other around and bickering endlessly. Oh, and these rude strangers
are also doubly incontinent, and relieve themselves copiously all over
your furniture.

I suspect that you wouldn't be too happy about the situation. And
neither am I.

This morning I was not much happier, as I scrubbed bird poop off the
deck, the strong ammonia smell making me gag. The situation was even
affecting my appetite – and normally nothing comes between me and my
food. But it's hard to work up enthusiasm for your breakfast when your
surroundings smell like a public toilet.

I was at my wits' end. It was clear that I was never going to be able to
get it through the boobies' thick birdbrained skulls that they are not
welcome. Repeatedly hitting them with the dustpan had no effect
whatsoever, other than a fleeting sense of satisfaction as I sent them
somersaulting into the ocean. But they just came back again. Nor do I
have any way to physically prevent them from landing on the boat, other
than what I had already tried with the ropes.

If I'd had a gun on board they might have been in real trouble. I
entertained dark thoughts about trying to shoot them with a marine
flare. I seriously considered trying to catch one and wringing its neck,
but eventually decided it was excessively harsh to kill them when they
are just too plain stupid to know any better. So I seemed to have run
out of options. Would I have to put up with their antisocial behavior
for the next 800 miles? I felt rather despondent.

But by this afternoon I had arrived at a more philosophical state of
mind. I realized that I can't get rid of them, so I either have to
accept the situation or drive myself crazy. So I've given up blatting
them away with the red dustpan. They only come straight back again, and
it sets off another round of rowdy squawking as they repeat their
jostling for prime position. The fore cabin is filthy, but I can't reach
it to scrub it. I'm even gradually becoming immune to the stink.

So I have more or less accepted that for the foreseeable future I will
have to tolerate my unwanted hitchhikers. It really is amazing what the
human animal can adapt to when (written with gritted teeth) she really
has absolutely no choice.

[photo: Booby completely oblivious to my anti-booby measures, standing
proudly in his own mess. Smart? I don't think so…]

Maybe my zen acceptance is partly due to my choice of audiobook for the
day – James Herriot's Vet in Harness.– beautifully told stories of the
travails of a young vet in the Yorkshire Dales in the 1930's. All very
earthy, with lots of muck and blood to put my current issues in
perspective. Also made me feel, unexpectedly, rather homesick. Resolved
to spend more time in English country pubs when I next have the
opportunity.

Made better rowing progress today. The wind spent some time in the
northeast, which was welcome. Got another email from Jason Lewis which,
while giving me invaluable information, also fed my lurking anxiety
about what might happen between 6 and 3 degrees North. But there's no
point worrying about it. It will be what it will be. At least the battle
of the boobies has provided me with some distraction from the rather
more substantial concerns that lie ahead.

As I write this blog there is a torrential downpour going on. I hope it
washes away some booby poop.

Karen Morss, you are a legend. So J Maarten Troost wrote back to you –
unbelievable!! Can't wait to hear what his thoughts are on Tuvalu vs
Tarawa – although ultimately it will probably be the ocean, not me, that
makes the decision.

Thanks for all the other comments – on boobies, plastic pollution,
everything. All much appreciated.

For those who have written to say you are giving up using plastic bags –
THANK YOU!!!! This is such a big win. If you check out the store at
rozsavage.com there are some super eco-friendly re-usable bags, made
from recycled plastic and themselves recycleable, and bearing the
inspiring message: IF WE ALL PULL TOGETHER, WE CAN SAVE THE WORLD.