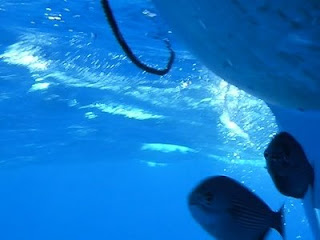 Today was a good day for fishy-spotting. The ocean was rough, and as a
big wave passed under my boat and out the other side I noticed several
fish silhouetted in the peak of the wave. I got out my waterproof video
camera and dangled my arm over the side, trying to get shots of the
ghostly forms as they filed past under my boat, heading from east to
west.

Unfortunately my faithful followers got jealous of these
Johnny-come-latelies stealing the limelight and kept getting in the way,
hamming it up in front of the camera lens. These are the dark stripey
chappies who regularly hang out in the shade under my boat, using it as
a kind of mobile marine parasol. My friend Sarah Outen (currently rowing
the Indian Ocean – see sarahouten.co.uk) tells me these are pilot fish.
More like prima donna fish if you ask me.

But they're quite cute – and in fact, because they were so keen to get
up close and personal with the camera I got much better shots of them
than I did of their more aloof cousins cruising lower down.

Later on this afternoon my eye was caught by a blue fish doing a
backflip. Twice. Not quite sure what it was up to, but it leaped clear
of the water in a vertical motion – maybe to escape a predator, or maybe
just for the sheer joy of it. But it didn't do it again, and so remained
unphotographed.

So, attention-seeking little critters that they are, the pilot fish are
the ones that make it into tonight's photo slot. If nothing excitingly
photogenic happens tomorrow (like a row of porpoises dancing the cancan,
or a shark eating my rudder for breakfast) then I'll post a pic of the
other guys on my next blog.

[photo: pilot fish against the underside of my boat. The black loop is
the grabline that I use to get back on board. Hmmm, looks like it's time
to go scrub barnacles again!]

Here's the scoop: there is a seriously important climate change bill
going before Congress this Friday for a vote. When I was in Nashville
for the Climate Project conference just before I embarked on this
voyage, this bill was the topic on everybody's lips. They were very
excited about its potential to put America at the forefront of action on
climate change.

It's called the Waxman Markey Bill – also known as the American Clean
Energy Security Act. This historic piece of legislation is long overdue
and would be a major step in the right direction. This bill will achieve
REAL carbon reductions by 2020 and passing it would send a message to
the world that the U.S. is serious about solving the climate crisis NOW.
Not only that, but it would help create a new green economy, creating
about 1.7 million new jobs.

Now, I'm not American so you could say this is none of my business, but
climate change is everybody's business, no matter what country we're
from. This issue does not recognize national boundaries. As Al Gore said
yesterday, "The rest of the world will follow OUR lead. The next
generation is counting on us. Our economy and our planet cannot afford
to wait."

So please call or write to your Representative, asking them to vote in
favor of this bill. A very easy way to do this is to go to
www.repoweramerica.org and add your name to the petition. Nicole tells me
that she called her Representatives in Arizona and left a voicemail this
afternoon urging their action on this as a registered voter and taxpayer.
You can do the same.

And if you're not an American, you don't need to feel left out. This
December in Copenhagen representatives from all over the world will be
gathering to decide what to do about climate change. Let them know you
care. Let them know what kind of a future YOU want. Write to your
government and your representatives and make your views known. It all
counts!

Nicole is going to be on the Andy Bumatai show tomorrow to give everyone
an update on my progress. You can watch it at www.TheAndyBumataiShow.com
at 1 pm Hawaii time. She will probably be up at the top of the show. The
video will be posted to YouTube shortly thereafter.

Nicole predicts that I will cross the 1,000 mile mark at about 1am Hawaii
time tonight. So raise me a glass and wish me luck for the next 1,000!

I seem to be in the wars. Following on from yesterday's strained
pectoral, today I took a tumble and found myself sitting down rather
abruptly – and not on a seat, unfortunately. I landed on the end of one
of my seat runners, where lives a removable pin with a ring on the top –
the imprint of which is now firmly embossed on my right buttock. It bled
a little so I duly daubed it in disinfectant but am having extreme
difficulty in applying a band-aid to a wound I can't see. Most
inconvenient.

Conditions continue rough and windy, with all the weather coming from
the East. But I continue to plod stoically south as much as I can. It
would be much easier to go with the wind and the waves. But then I'd
probably end up in the Philippines – which isn't the game plan.

Crescent moon: was sighted at sunset, around 1930 HST or 2030 local
time. But I suspect this is too late to be of interest to the crescent
moon spotters. Sorry!

Sky conditions: Partly to mostly cloudy with variable cloud cover next
five days. Very isolated rainshowers. The Inter-Tropical Convergence
Zone (ITCZ) has quieted down since last report. This is an area of
converging winds from the northern and southern hemisphere which can
cause convective activity which increase the chance of heavy
rainshowers, thunderstorms, and lightning. Presently, the ITCZ lies
between 8-10N.