I’m now back from my mega month-long US trip, and getting my feet back under my desk. The next few months will be spent in very hermit-like fashion, focusing on my doctorate. But still blogging on a weekly basis – I really appreciate these opportunities to share my thoughts and get feedback. 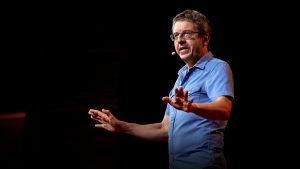 I’ve mentioned George Monbiot’s excellent 2019 TED Talk before (in a blog post in August), and make no apology for mentioning it again – especially as I have just got off the phone with George, who was rather busy given his involvement with Extinction Rebellion, and XR had just won their High Court case, but was still good enough to make time for our call.

(And so great to see the very impressive Bella Lack right there on the XR home page.)

In his highly entertaining talk, George says we need a new story to replace the old neoliberal story of individualism and selfishness, which passed its use-by date with the financial crash of 2008 (if not earlier) but has yet to be replaced with a compelling new story.

Yes, we need a new story that we can rally around. The narrative we currently believe in would appear to be one of dominion over the Earth, rather than stewardship, or even partnership. Possibly this is based on a mistranslation of the Genesis story, which we usually hear thus: “And God said, Let us make man in our image, after our likeness: and let them have dominion over the fish of the sea, and over the fowl of the air”. But see this site for a less anthropocentric interpretation. Certainly, the “dominion over” version isn’t working out so well for us at the moment, and “partnership with” would seem to be an excellent idea.

George reports on recent findings from sociology, psychology and neuroscience, which tell us that human beings are wired for altruism, compassion, and cooperation. After all, we’re not the strongest, fastest, or biggest creatures, so we had to have something going for us to achieve our runaway success. And I believe that we ARE altruistic. I have often been on the receiving end of a great deal of generosity and altruism, and hopefully also on the giving end.

And yet we live in structures and systems that tell us otherwise. The media over-emphasise the oligarchs and CEOs and politicians who are only out for themselves, for money and power, living in a zero-sum game where greed is good, and you are either a winner or a loser. And so we end up in a race to the bottom of a dog-eat-dog world.

Alex Evans, in his book The Myth Gap, tells us that we need to embrace a myth of “a bigger us, a longer now, a different kind of good life”. George suggests that this could start by embracing the commons as a starting point, in a participatory democracy, a politics of belonging. (See Nobel Prize Winner Elinor Ostrom on the governance of the commons.)

So how do we change the system, when the world is run by people who have benefited from the status quo? We start from the grassroots. And this – I believe – is where women and girls REALLY have to step up and make our voices heard.

George and I agreed that some of the most powerful voices emerging right now are women: Greta Thunberg, AOC, Kate Raworth, Ellen MacArthur. As well the other wise women who have been great influences for a decade or more – Barbara Marx Hubbard, Riane Eisler (who I saw last month at her home in Carmel), Polly Higgins (see my tribute to Polly earlier this year).

I’m sure I’ve quoted this before, and I’m going to quote it again, as it’s a rare day that I don’t mentally refer to it.

And by the way, it’s a pretty good narrative to live by.

“You have been telling people that this is the eleventh hour.
Now you must go back and tell people that this is the hour!
And there are things to be considered:
Where are you living?
What are you doing?
What are your relationships?
Are you in right relation?
Where is your water?
Know your Garden.
It is time to speak your truth.
Create your community.
Be good to yourself.
And not look outside of yourself for a leader.
This could be a good time!
There is a river flowing very fast.
It is so great and fast that there are those who will be afraid.
They will hold on to the shore.
They will feel that they are being torn apart, and they will suffer greatly.
Know that the river has its destination.
The elders say that we must let go of the shore,
push off into the middle of the river,
keep our eyes open,
and our heads above the water.
See who is in there with you and celebrate.
At this time we are to take nothing personally,
least of all, ourselves.
For the moment that we do,
our spiritual growth comes to a halt.
The time of the lone wolf is over.
Gather yourselves!
Banish the word struggle from your attitude and your vocabulary.
All that we do now must be done in a sacred manner and in celebration.
We are the ones that we have been waiting for.”