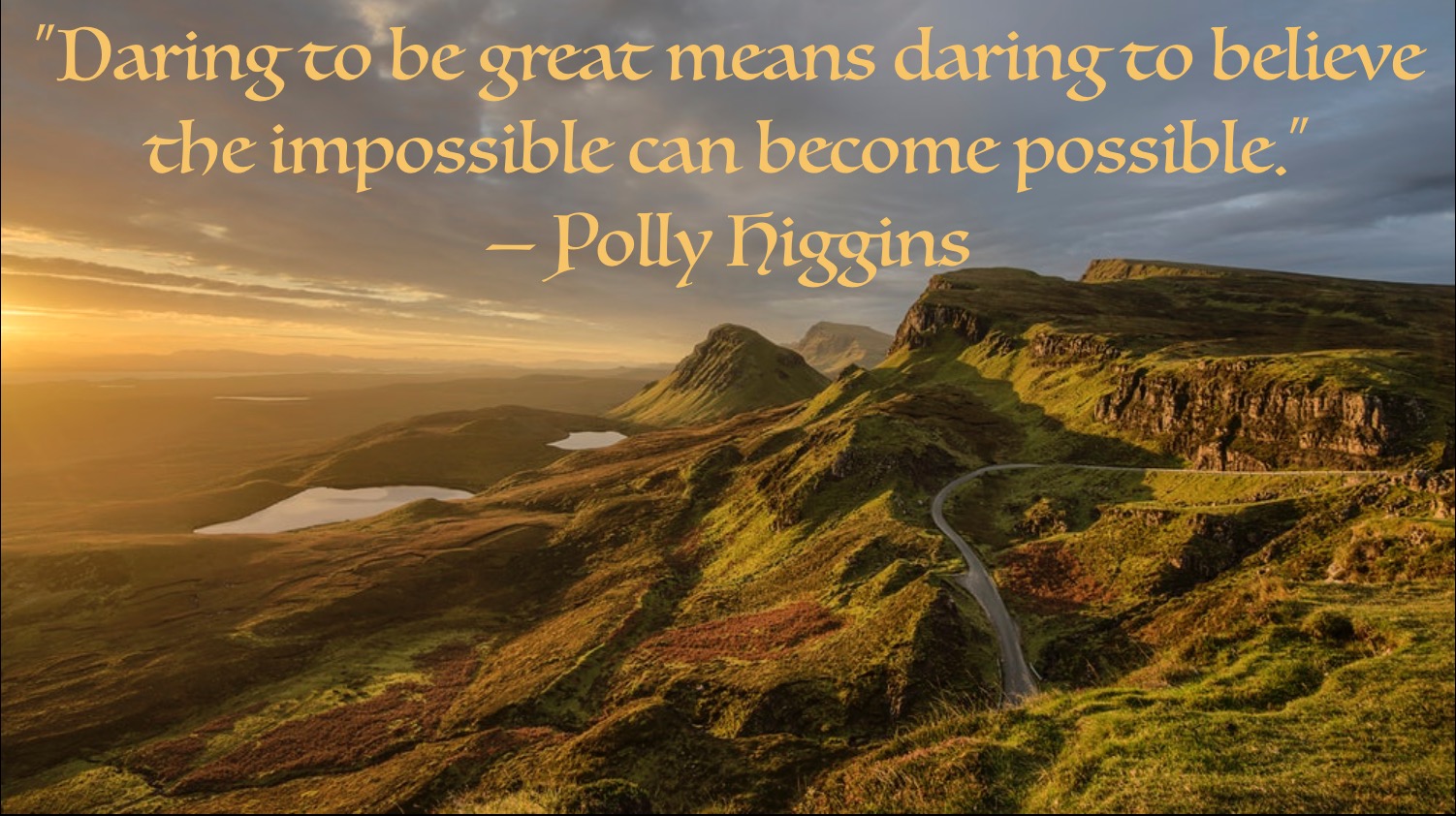 I’m sad to say that the world has lost yet another great and courageous advocate for a better future. I was honoured to call Polly Higgins a friend, and her death at the age of just 50 has, I’m sure, left a gap in the many lives that she touched during her passionate campaign to have ecocide recognised as an international crime, ecocide being the wilful destruction of our ecosystems by corporate or government action.

I first met Polly back in November 2009, when we both went to an event organised by a mutual friend at the Fortnum & Mason store in London. We quickly discovered that we had a lot to talk about, so as soon as we could we sloped off to find somewhere where we could speak more easily. We ended up in a very odd establishment – a vast restaurant with hardly anybody in it, with waiters who seemed to have only the vaguest idea what waiting tables involved. We concluded that the restaurant was probably a cover operation for some nefarious activity, but we stayed anyway, and talked for hours about our shared concern for the future of Earth.

We spent time together again the next month, at the COP15 UN conference in Copenhagen, hoping for a fair and binding deal on climate change, which sadly failed to materialise, and the following year I stayed with Polly and her husband, Ian, at their home in Islington. I don’t remember now exactly how long I stayed, but as I had no fixed abode during those ocean rowing years, I suspect it was longer than a houseguest should. I do specifically recall that for whatever reason I was short of clothes, and Polly loaned me some of her own. That’s what she was like – a true friend who would literally give you the clothes off her back.

I have many more personal memories that I could share, but I will instead focus here on Polly’s work and legacy.

Having started out her professional career as a barrister, which could have led to a lucrative life of ease and comfort, Polly answered the call to adventure by becoming an advocate for the Earth. She combined her legal training with her environmental passion to home in on the idea of criminalising wilful ecological damage as the most powerful tool to prevent further destruction. She later discovered that this was in fact a reboot of an earlier idea that arose in the idealistic period after World War II. Her book, Eradicating Ecocide, was published in 2010.

As well as having a formidable intellect, Polly also had a huge heart, and a strong spiritual life. At TEDxWhitechapel, at the last minute she discarded her prepared remarks about ecocide, and instead talked on the theme “Dare to be Great” – definitely walking the talk when it came to daring greatly. This was a phrase that had come to her while she walked barefoot in a downpour in the New Forest, and became her call to action, as well as the title of her third book. She challenged all of us to become the leaders we have been waiting for, rather than waiting in vain for a hero. She saw this recognition of our interdependence as crucial to the shift to a sustainable future – interdependence between humans, and interdependence between humans and nature. She identified three core values:

“[My work] is driven by a huge amount of love for people and planet,” she said. “It’s the love that drives me forward. I love this earth, and it is utterly untenable that we keep on destroying it.” She saw no role for hatred or blame, only love. It’s not about being a protester, she said – it’s about being a protector.

And this, I think, is a rare and precious quality. Christiana Figueres, an equally impressive woman, also has it: the ability to speak both from the head and from the heart, having the knowledge but also the wisdom, combining clear sightedness with compassion.

In terms of her legacy, she reminds me of Rachel Carson who, like Polly, was claimed by cancer at way too young an age, but left us with powerful writings that both sound an alarm bell, and point the way to a better future.

The last few weeks I have started to feel more like an obituary writer than a blogger. I sincerely hope that it will be a long while before I need to pay tribute again to a late, lamented spirit like Bernard Lietaer, Barbara Marx Hubbard, or Polly.

At the same time as we are losing the older guard of luminaries from the environmental world, it also feels as if there is a passing of the baton to the young people, like Bella Lack and Greta Thunberg, who have the moral authority as representatives of the generation that will bear the brunt of climate change and the sixth mass extinction.

We will, of course, miss having Polly with us in person, but her work will be carried on by her team at Earth Protectors. You can sign up to become an Earth Protector yourself – your donation (min 5 Euros) goes to help fund the campaign by small island states pursuing the enactment of ecocide law through the International Criminal Court.