Dr Sylvia Earle is a legend in the world of marine biology and conservation, respected and revered and affectionately known as “Her Royal Deepness”. But does she make her case in this speech at TED? I was fascinated not only by the presentation, but also by some of the comments beneath. If even the most distinguished underwater explorer in the US cannot convincingly argue that the ocean is essential to the health of the planet, then where did she go wrong – if, indeed, she did? Or are the doubters the kind of people who would doubt anything?

Next month I will be taking part in a panel discussion at the Blue Vision Summit in Washington DC, alongside Sylvia Earle and Philippe Cousteau, among others. The topic will be how we can communicate so as to make people care about what is happening in the oceans. What will make them sit up and take notice?

I would really welcome comments on this blog, if you can give me any suggestions as to what is most likely to increase knowledge and motivate action. My perception is that education is not the way. There is plenty of information available if people are interested. But most of them are not interested, because the oceans are not perceived as relevant.

Yet all life on earth – including ours – depends on the oceans. How to convey this? And then, once they care, what should people DO?

I have my own ideas, of course, but I would welcome input from all quarters so I can better gauge public opinion and the view of the man on the street. Help me out here – and help me to help the oceans! 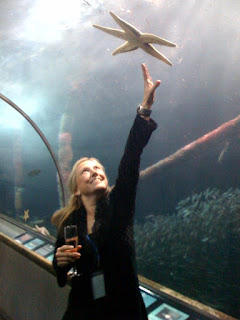 This weekend I made four presentations to around 600 people during the San Francisco Ocean Film Festival. The photograph shows me at the Opening Night Gala at the Aquarium of the Bay, indulging in two of my favourite activities – admiring underwater sealife and drinking champagne – not easily combined under usual circumstances, the scuba regulator with inbuilt champagne straw not yet having been invented.

Today I finished the final, final, final round of edits to the manuscript of my book about the Atlantic row. Despite my initial opposition, I have been persuaded to acquiesce to the wishes of my publisher and accept the title “Rowing The Atlantic”. It was certainly not my first choice, but I guess I have to pick my battles. Thank you to all who contributed to the long list of fascinating alternatives. A few will make appearances as chapter headings.

The book is due to be published by Simon & Schuster in early October. Hopefully we will be setting up a facility for you to reserve your signed copy. And look out for details of the book tour.

Work continues on the Brocade in Hawaii. Scott has been making good progress, with a view to having the boat almost shipshape by the time I return in April. Thank you Scott!

Nicole and I are currently in San Francisco, working hard and meeting lots of people in connection with PR, fundraising, media, speaking engagements, films and books. We are investigating the logistics of setting up a foundation – tentatively called The Ripple Effect. If anybody is or knows a California-based lawyer or accountant specializing in nonprofits, who might be willing to work pro bono, please let us know!