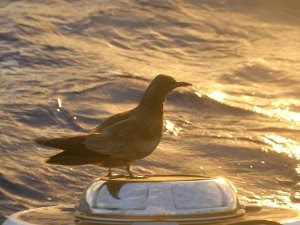 By recent standards today was a mega-result. 20 nautical miles closer to
the Equator, and 17 nautical miles closer to Tuvalu. It was a brutal old
day at the oars though, with constant high winds chopping the sea up
into steep peaks and troughs coming at me broadside from the esast. But
for the gain of 20 miles I'm willing to put up with some uncomfortable
rowing and frequent dousings.

Not wanting to seem ungrateful, but the one downside was that I also got
pushed a few miles west, and I'm trying to hang on to all the east that
I can. In the zig-zag-zig of my intended course, I want the zag
(eastwards) to be on the generous side. It doesn't matter if I get down
to the latitude of Tuvalu too early – the winds will help me the rest of
the way – but if I get down there too late…. Then it's hello Philippines
– and another few months at sea before I have the chance to make
landfall. This would most definitely NOT be okay.

This reminds me of a few lines from one of my favorite poems, Rudyard
Kipling's If.

If you can dream – and not make dreams your master;
If you can think – and not make thoughts your aim;
If you can meet with triumph and disaster
And treat those two imposters just the same;
….
If you can fill the unforgiving minute
With sixty seconds' worth of distance run –
Yours is the Earth and everything that's in it,
And – which is more – you'll be a Man, my son.

I'm not likely to ever be a man – nor, with all due respect, would I
ever want to be – but to take the words in the spirit in which they are
intended, I hope I can treat the twin imposters of big mileage and
little mileage, and take them just the same. In either case, my effort
has been the same – it is just a matter of what the ocean has allowed me
to achieve. There is no "conquering" of oceans here – it is by the grace
of the ocean that I will succeed – eventually.

[photo: The little birds were on board again today at dawn. Here is one
perched on the aft hatch of my sleeping cabin. They're not as messy, nor
as noisy, as the smelly poopy booby birds…]

I've realized that the tsunami I ordered (to spice up my voyage) was due
to arrive on July 23. But it hasn't turned up. If there was a tsunami
after the New Zealand earthquake it didn't reach me. Darned deliveries –
never on time! I could call them up and see where it's got to, but of
course I've lost the tracking number and they'd probably just tell me
it's in the mail… so that's blown my chances of getting rescued by the
Johnny Depp lookalike. Sigh!

Rozta' Bill was asking about my hashtag on Twitter. I can't follow Twitter
from out here, but Nicole tells me that #rozsavage is the best way to find
fellow Roztafarians. Thanks for asking!

Eco Champ of the Day #1! Laurey in Asheville, NC (which I very much hope
to visit sooner rather than later!)
"I have a catering company and a restaurant, as I think I've
mentioned. We carry bottled water with our name on the bottle. Yes,
plastic. Yes, the disposable kind. WE recycle the bottles but probably
not everyone does. So I am going to use up the rest of the bottles we
have (the company makes them by the pallet load for us) and then I will
not order any more.

We also carry nalgene water bottles with our motto "Don't Postpone
Joy(r) on them but they are the good, hard, reuseable kind, not the
disposable kind. We will continue to encourage folks to use them and
will, once this order is finished, no longer sell the disposable ones."
This is great – just the kind of mindful attitude that I love to hear
about. Whatever your occupation or role in life, I'm sure you can find
creative ways to do your bit.

Eco Champ #2 – Stormcloud wrote to comment how disappointing it is in
books when a character throws away something plastic, or uses a
Styrofoam cup. So authors of fiction can actually help change our
values. The planet thanks you!

Eco Champ #3 – Kathy Miritello!
"Thank you for raising consciousness about ecological issues —
I'd never heard of the floating island of plastic out in the ocean and
was appalled to learn how vast it is! Since then, I bring my own
reusable shopping bags whenever I go grocery shopping, have a growing
stash of Starbucks travel mugs that I take with me instead of getting my
favorite beverage (chai tea latte) in their paper cups, and recently
bought a stainless steel reusable water bottle to fill instead of a
plastic bottle. Oh, and newspapers — they make the best weed barriers
for mulched planting beds!"
I love chai tea latte too – and I've got my travel mug on board just in
case there's a good coffee shop in Tuvalu!

Richard in Austin – I loved the sea shanties! I just have to share them
here, for anyone who didn't see them in the comments:

I'm not good at patience,
I'm not good at rhymes,
I need western movement
On these longitudinal lines.
And if the gods will protect me,
And take me still far,
I'll keep on a-munching my Larabar.

I know that my poem
Seems pretty dumb,
It sounds a lot better
After quite a few shots of rum.
And there's an island awaiting
It's the next logical step,
Because waiting on the beach
Is that hunk Johnny Depp.

Vern – thanks for pointing out the metaphorical angle – how very true!

Jess Rees – congrats on taking on the obituary exercise, although it
sounds as if you don't need to! Paulo Coelho's book must have touched so
many lives. What power. Maktub.

Special hellos to UrbanCowgirl and Carla Salikin & Larry Wallace in the
Northwest Territories of Canada – thank you for your comments, your
support, and for spreading the word!

Rowing adventure tour??! I like the idea of me being the drum beater and
having other people row me around for a change! We could borrow the
Greek Trireme that I rowed on when I was 19 in Greece – room for 174
rowers. Hmmm, 174 x $5K….!

Q: Roz: have you ever read Arthur Ransome's Swallows and Amazons?
A: I'm ashamed to admit that I haven't. Will take note and try to get
the audiobook for Stage 3!

Q: Do you have disaster insurance?
A: Nope. Nobody will cover me!

Q: When you arrive at shore after a crossing, How long does it take to
get your land legs? Do you weave as you walk?
A: Usually about a week – and yes, there is a bit of weaving involved,
and it's not all due to the beer!