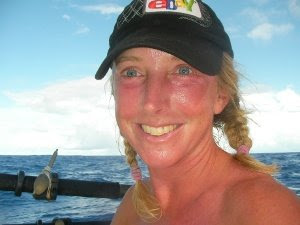 This morning there were seven little birds on my boat when I woke up. In
fact, it was they that woke me up – a couple of them were tap-dancing on
the roof of my sleeping cabin and the unfamiliar noise brought me out of
zzz-land. I came out on deck to find there were two more on the roof of
the fore cabin, a matching pair on each end of the furled bimini, and
one perched on an oar.

Seven seemed like an auspicious number – and maybe they did bring me
good luck, because today many squalls passed by but none of them
actually hit me until this evening. By that time I had finally, finally,
after a lengthy ding-dong battle against the elements, made it across
the line of latitude at 4 degrees north. Until I reached the ITCZ I was
crossing each degree of latitude in about 3.5 days on average. To get
from 5 degrees to 4 degrees north took me over twice as long – 8 days.
So there were big hurrahs on board the Brocade, I can tell you!

I'm having to be very disciplined about not extrapolating or predicting
based on present rates of progress. I keep nearly falling into the trap
of thinking that if I've done x miles in my first shift, then by the end
of today I'll have done y miles and crossed z line of latitude. And it
just doesn't work that way. No sooner will I have finished my mental
arithmetic than conditions will change and I'll find myself going
backwards. So it's much, much better just to take it as it comes, and
regard any progress as a welcome bonus – and backwards progress as,
well, just one of those things. Swear about it and then accept it.

This reminds me – I once attended a course with a company called Mission
Performance, who use Global Challenge sailing skippers to help corporate
clients develop team skills. They introduced me to a useful concept. If
two members of their crew have a row, they tell them not to bear a
grudge but to "leave it on the wave behind".

So that's what I try to do. Rather than saying to myself, "if only I'd
managed to carry on at that rate then by now I'd be over there", it's
better to just forget it. Leave it on the wave behind. Things are
exactly as they are meant to be.

But it's easier said than done. I'm trying not to think about what lies
ahead – just take it one hour at a time, I keep reminding myself – but I
can't help hoping that the next few degrees are not going to be more
challenging still.

[photo: trying again to upload the photo that refused to be squeezed
through my slower-than-an-ocean-rower Iridium connection last night…]

Eco Champ of the Day! Well done Amy, on your consumer choices.
"You are a regular part of my day as I follow your progress and make
small, simple choices like not buying bottled water (I carry an alumnium
water bottle) and brining reusable bags to the grocery store."
It all helps!

Norman – I was very touched to receive your message. Thank you – and
wishing you all the best in your battle against cancer.

Aaron – you wish you could give me day off while you row instead? You
and me both!!

And thank you to all the other Rowsters for your comments, support and
feedback! Ooh, and your orders for my book – THANK YOU! (And thanks
again to Richard Cort of Austin, TX – Mum reminded me it was you who
first came up with the great idea of the Larabar bookmarks that is
catching on like wildfire – nice one!)

Q: Roz, do you have a plan if a typhoon should come your way? Do you
think your boat would hold together in winds of 150 mph and falling off
waves of thirty feet?
A: To be honest, yes, I do think that my boat would hold together in
those conditions. We've handled waves of 20 feet without problems since
we modified the boat in 2007-8, adding 200lb of lead to the keel and
increasing its depth by 5 inches. So if a typhoon hit, I'd retreat to
the cabin, put on my crash helmet, use the seatbelts in there to strap
myself to my bunk, and hope that it passes quickly!

Q: How do you stay "on course"…do you focus on a compass as you row?
A: Yes, I do use a compass mounted between my feet for navigating while
I'm rowing – although usually the wind (when not changing direction
every 5 minutes) keeps me on track. And I check the GPS at the end of
every rowing shift, but more to see how much progress I've made (if any)
rather than direction. The compass is battery-powered and has an inbuilt
red light so I can see it at night without losing my night vision.

Q: I am always intrigued at how supposedly humans need human
contact…and yet you seem to thrive without it..do you ever crave human
contact, a hug….
A: Not while I'm at sea – no. It's one of those things, like wine, that
I really appreciate and enjoy when available, but if not available I
don't even think about. But a massage, now that is another matter
altogether!