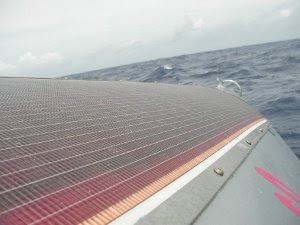 Today America is celebrating Independence Day, and although as a Brit I
don't celebrate July 4, I have been celebrating my own version of
independence. One of the things that gives me the most satisfaction
about my ocean-bound existence is the feeling of having everything that
I need, right here, within the confines of my little 23-foot boat.

I've got my food – plenty enough to last me for months to come, if need
be. I've got my watermaker, an electric unit that uses reverse osmosis
to convert seawater into drinking water. And I have unlimited supplies
of electricity, thanks to my solar panels and more sunshine than I know
what to do with.

For the techies, here is the geeky low-down: On the roof of my aft cabin
I have 4 x 60W panels, and on the fore cabin 2 x 40W panels. They charge
two marine batteries, one in each cabin – about 52Ah each. And those
batteries power my entire electrical system – as well as the watermaker
there is a bilge pump, VHF marine radio, Lazarus the temperamental
stereo and a cabin light. Everything else runs off a bank of 6 cigar
lighter sockets. The GPS and the Solaradata tracker are permanently
plugged in, and I plug in other things (cameras, laptops, satphone etc)
when they require rechargingI have a 150W AC inverter for the gadgets
that won't run off 12V DC.

So far (touch wood) the solar panels have worked flawlessly. They are
the only components of electrical kit that have survived since the
Atlantic crossing in 2005. They just sit there, sunbathing and churning
out electricity to charge Brocade's batteries.

So here I am, all self-contained and self-sufficient. It's a good
feeling.

So to now extrapolate wildly – and maybe a little disingenuously – from
this example… I have a question: why would anybody resist moves towards
renewable energy – like solar?

Let's for a moment put aside the whole issue of climate change. Just
park it. Put it out of your mind. Whether it's real or not, caused by
humans or not – all irrelevant for now.

And let's consider these questions:

1. Would you rather get your energy from clean sources or from
polluting sources?
2. Would you rather get your energy from infinitely renewable
sources (wind, solar, tidal etc) or from sources that, whichever way you
slice it, will run out at some point in the future?
3. Would you prefer that people – particularly children – are
afflicted by asthma, autism, and other pollution-related diseases, or
not?
4. Would you prefer that America leads the world in the emerging
energy and transport technologies, or that it gets overtaken by other
countries?
5. Would you rather that your country is self-sufficient for its
energy needs, or dependent on oil imported from some very questionable
foreign trade partners?

For me personally, I like being self-reliant. I like to know that I am
in control (weather aside) of my own destiny. I like knowing that the
key to my future is in my own hands. And for me this is a strong
argument (amongst many) in favor of renewable energies. Most of them can
be generated within the country in which they are needed.

To me, it is baffling that anybody would want to live any other way.
Self-sufficiency in any sense, whether it relates to energy sources, or
even physical and emotional self-sufficiency, is very empowering. Why
would anybody deliberately choose anything else?

[photo: the solar panels on my fore cabin – now thankfully washed free
of the booby bird poop that my feathered friends deposited on them in
the first couple of weeks of my voyage, threatening to seriously reduce
my electricity supply…]

Today was a good day at the oars. Some days (most days!) motivation is a
challenge, but today was a little easier than most. There is no
particular rhyme or reason to it. It's just the way it is. I used to
beat myself up for not being super-motivated every day. But hey, when
you're out here for 100 days at a stretch, there are bound to be good
days and not-so-good days, and I've learned to accept each as it comes.

Oooh, just picked up the email from my Mum passing on your comments –
and the good news that in the 24 hours before she sent the email I had
covered 44.5 miles. That IS a good day – yippee!

Thanks for all the great comments from my team of landlubbing
cheerleaders. I really appreciate the moral support. You're great!

Thanks also for all the interest in the Larabar bookmarks. I'm glad the
idea is catching on! When I get back to dry land we'll sort out the
arrangements and put them in the eBay store – and announce them on the
website. So stay tuned!

Thanks, UncaDoug, for the song lyrics. Made me laugh!

And thanks to the folks who have sent details of when and where I might
see the Space Station. I will look out for it tomorrow night. Will it be
looking out for me?!

Q: What University did you attend and were you on the row team?
A: Oxford University. Yes, I rowed for the University twice, in my
second and third years.

Q: How does ocean rowing compare to running a marathon?
A: Hmmm. I ran marathons because people told me I would learn things
about myself in the last few miles of a marathon. The main thing I
learned was that running 26.2 miles hurts like hell and makes your
toenails drop off. So maybe I needed a longer challenge, and a more
independent one. Ocean rowing is a lot more free-format. There is no
particular mainstream way to train for or complete an ocean row. It is
less of a race, more of an adventure into the unknown. And if you think
better of it part way through, you can't catch the bus to the finish
line!

Q: Does your body get use to the rigors of ocean rowing?
A: Yes, the body does. And eventually so does the mind. I am a firm
believer that human beings can adapt to almost anything – if they are
sufficiently motivated.