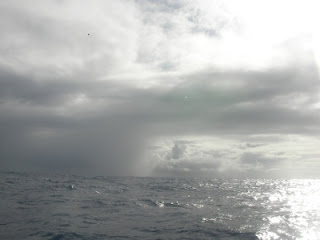 I'm taking a question from the floor today – or in fact, 8 questions,
all about my boat. I'd love to illustrate this blog with some pictures
of Brocade, but to get an external shot I would have to go into the
water, and since the episode with the mysterious slimy thing attaching
itself to my right buttock I have not ventured back into the waves. So
I'll invite you to mouse on over to my website at rozsavage.com and take
a look at the gallery. Loadsa photos there. OK, onto the questions.

1) are supplies securely stowed low? In the stern only?
Supplies are indeed stowed low, in the lockers below deck level
throughout the boat, beneath both fore and aft cabins and also the
cockpit.

2) or are supplies somehow stowed floor to ceiling?
Nope. No need.

3) can supplies tumble around from wave motion or capsize?
Nope.

4) does Brocade have ballast to right itself from a capsize?
Yup. After 20-foot waves caused me to capsize 3 times in 24 hours in
2007, resulting in the abandonment of that attempt, we installed 200lb
of lead in the bottom of the boat, and increased the depth of the keel.
I also have water ballast stored in Dromedary bags – about 100 liters –
which double up as an emergency water supply that came in very handy
last year when both my watermakers broke. As I used up the water, I
replaced it with seawater to maintain the ballast.

5) or is it designed to right itself without ballast?
Yes, it would self-right without ballast. But I can say from first-hand
experience that capsizing is absolutely no fun, and best avoided.
Imagine being in a giant washing machine being thrown around with
various hard objects and you get the picture.

6) do you get water of any consequence in the bilge?
I don't exactly have a "bilge" other than the storage lockers. I wish I
could say they are all watertight, but despite our best efforts the
lockers under the cockpit leak a bit. The ones under the cabins stay
pretty dry.

7) are supplies at risk of damage from water in the bilge?
Nope, not now. I've learned the hard way that there is no such thing as
"100% waterproof" so anything that can be damaged by water is thoroughly
sealed. The FoodSaver vacuum seal machine is my friend!

8) do you have a bilge pump or manual access to bail?
There is a footwell just outside the hatch to the aft cabin, where lives
my liferaft, water can, and bucket. That is the only area that really
needs regular pumping, and I have an electric bilge pump. But I know
from past experience that a bucket works just as well!

Mick Dawson taught me all I know about ocean rowboat safety while he was
working for Woodvale, organizers of the Atlantic Rowing Race, and he
impressed upon me the importance of stowing low, a) to reduce risk of
capsize, and b) so that if the boat does still capsize, chaos and damage
are minimized. Mick is currently on his own expedition across the
Pacific, from Japan to San Francisco (see goldengateendeavour.com). He
and crewmate Chris Martin are about 10 degrees west and 25 degrees north
of me right now. Hello guys! Can you see me waving?!

Between Mick's tuition and my own hard-learned lessons, I mostly manage
to stay the right way up, and keep important supplies dry. But the
bottom line is that, with boats, water gets into all kinds of places it
has no right to be. And anything that can go wrong, will. And that's
just the way it is!

[photo: there have been some questions about how far away I can see
weather coming at me. I don't know the answer in terms of miles, but
here is a photo from this morning showing some big black clouds heading
my way…]

Rough stuff out on the ocean today. Rowing technique was of the
bish-bash-bosh variety – just stick the oars in when you can. Not very
refined, but I managed to bludgeon my way a few miles further south
towards the mysterious world of the ITCZ, now about 120 miles away to
the south.

I've had lots of people asking how I will celebrate crossing the
Equator, but I refuse to answer that question yet. Rower Erden Eruc had
enormous problems trying to get into the southern hemisphere, so I'm not
going to tempt fate by starting to plan any parties just yet. In any
case, it's still over 550 miles away, on the other side of the ITCZ, and
I'm just taking it one day at a time…

Kathy – thanks so much for telling me about the 100-year-old lady still
weight training and throwing the hammer. Don't we all hope to be like
that at her age! Nicole (my program director) has the most awesome
granny – 85 and still going to the gym. It really does seem that some
people are only as old as they choose to be.

Lesley – thank you so much to you and all at the CCC for the
contributions. Sorry to hear that times are tight – so I appreciate your
financial support all the more. And I hope to sample your brownies next
time I am in the area! (I'm sure you'll have then down to a fine art by
then – no more burned ones!)

Christa – thanks for the link. Will store for future reference. And
thanks to Richard Cort in Texas who suggested using laminated Larabar
wrappers as special, limited edition bookmarks – great idea! I think
that one is the front runner right now.

And well done to Andy Murray for getting so far at Wimbledon. Better
luck next time – and at 23, still many more years to come back and try
again!

Q: Tom Hanks had "Wilson". Have you considered traveling with a cat,
parrot or other carbon-based life form?
A: I did consider getting a ship's parrot, but was told it would be
cruel to the bird. Bad enough for a human…

Q: Have you tried rigging up a hammock on your deck?
A: No, although if I had one I would.

Q: Roz, do you see sharks fins? Whales? Other large/intimidating
animals/fish? And, how big would you say the biggest swells are that
you've experienced so far?
A: No, not on this voyage – no sharks's fins, or any other large
critters so far. Just small ones, mostly of a slimy nature… but I did
see whales and dolphins on both the Atlantic and between San Francisco
and Hawaii. Biggest swells on this voyage, only about 10 feet. In the
past, 20+ feet, which is plenty big enough for a 23-foot boat!

Q: Is there a possibility of getting struck by lightning?
A: Yup – same as anywhere else!