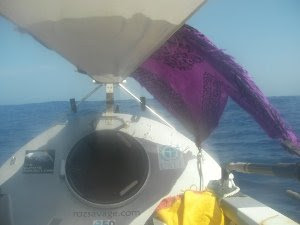 My right buttock has had more adventures this trip than some people have
in a lifetime. Having been featured on this blog at the peak of the red
rash / baboon bottom crisis, it then went on to fall victim to my one
(literal) slip-up of the trip, when I lost my footing and sat down too
suddenly on the round-topped pin of a seat runner, puncturing the skin.

Then, today, in its worst indignity yet, my derriere was attacked by a
mystery creature from the deep. Let me tell you my sorry tale (tail).

This morning brought a complete change in the weather conditions. After
the incessant 20 knot winds of the last 12 days, today has been dead
calm, the ocean eerily silent, the red ensign hanging limp. I decided to
make the most of the quiet conditions by catching up on some
housekeeping. Boatkeeping. Whatever.

First I cleaned out the galley locker. Its lid isn’t 100% watertight,
and after the regular deck-lashing waves of the last couple of weeks it
was getting a bit swampy in there. So I took everything out, mopped and
dried, and put everything back in.

Then it was time to go overboard and scrub barnacles. I hopped in – a
welcome relief from the sweaty heat. As I was working my way around the
boat with the plastic scraper, I became aware of a few tickling
sensations. I assumed it was the pilot fish that usually hang out in the
shade underneath my boat. I didn’t really like being tickled. Even
though the water was relatively calm, it wasn’t calm enough for me to
see clearly what it was that was doing the tickling, so it was rather
disconcerting and not very pleasant.

Suddenly I got the distinct feeling that something had gone beyond
tickling. It had attached itself to me. To my right buttock, to be
precise. Not good. OK, I admit it. I freaked out. Whatever it was, it
wasn’t welcome. I wanted to get out of the water, and I wanted to get
out NOW.

With undignified haste, I put my foot in the grabline and hoisted myself
up. I looked over my right shoulder to see what was going on. Yup, there
was definitely something glomming on to my bottom. This was even worse
than last weekend’s aerial squid bombardment. Eeeuuwww.

I can’t tell you what the something was, because I let out a very girly
shriek and swept it off with the flat of my hand as fast as I could. My
impression was that it looked squid-like, but I only got the briefest of
glances, and maybe I’ve just got squid on the brain. But right then,
zoological classification was not uppermost in my mind. Getting rid of
the grotesque glomming critter was.

Are squid known to do such things? Or could it have been a jellyfish?
Whatever it was, I’m not wild about the idea of getting back in the
water any time soon. I realize we’re not exactly talking Jaws here, but
this really is taking “getting close to nature” a bit far.

[photo: it was so hot today with no cooling breeze, so I rigged up this
sunshade using a sarong and a couple of rhino clips. It helped.]

With the lighter winds today, I’ve been able to make some good progress
south – more SSW than WSW. Good news for chances of making landfall,
depending on how long these conditions last.

Thank you so much for all the comments, posted on the blog, Facebook and
Twitter. Lovely to know that although physically I am very far away,
there are so many people who are following along and wishing me well.

Thanks too for the great information about hotels, bars, and boat
storage in Funafuti and Tarawa. After however long at Hotel Brocade
(Brocade is my rowboat) I’m sure I won’t be too fussy about presidential
suites or hot running water. But good to know they have beer. Imagine
“Ice Cold In Alex” times ten!

Bikini Atoll – would prefer to skip that one. I think it’s still
radioactive after the nuclear tests there. I just want a cold beer, not
one that glows in the dark…

American Samoa – about a 1% chance I could make it there. The winds are
blowing E to W, and American Samoa is almost due south of me. You’re
right, it would be easy to fly to. But not to row to!

Joan in Atlanta – thanks for the appreciation. It’s true, there are many
nights when writing a blog is not top of the list of Things I Want To Do
Right Now – hitting my bunk usually being significantly higher. So it’s
very nice to be appreciated!

Once in a Blue Moon – thanks for the lovely message. Amongst your
armchair adventures you mentioned swimming to Antarctica – presumably in
reference to Lynne Cox. I’ve met her, and she’s a fantastic woman.
Hoping she’ll write a blurb for my book.

On the subject of my book, Rowing The Atlantic, it’s available for
pre-order on Amazon. As of now. Just so you know! We’re also planning a
book tour. Details still to be confirmed, but hopefully taking in New
York, Seattle, Portland OR, San Francisco, Los Angeles and Boston,
between Oct 6-20.

Q: Are you going to row around the Cape Horn?
A: No. I’m adventurous. Not suicidal.

Q: Do I anchor at night?
A: No. To anchor to the bottom I’d need an anchor chain over 2 miles
long. I drift. Old Man’s response was absolutely spot on.

Q: What kind of beer would I like to be my first drink?
A: Actually, despite going on about it a bit recently, I don’t often
drink beer. But in these hot climes it seems much more appealing than
wine. I’d make a point of drinking local if possible. English beers
taste great in England – probably not so good in the South Pacific. Not
sure what they’d serve in Tuvalu/Gilbert Islands/wherever. So long as
it’s really, really good and icy ice cold, I’m not too fussy!