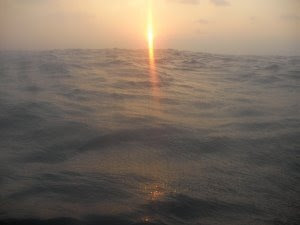 I'm now within 10 degrees of the International Date Line, and 11 degrees
of the Equator, and I'm starting to wonder just where I'm going to land
up. I'm really not too fussy, so long as it has an airport, a
restaurant, and a bar. A bar with beer, and lots of it.

I've been aiming for Tuvalu, although it's far from ideal – very
difficult for my shore team to get to, most likely nowhere to store my
boat, and very little infrastructure. Beer situation currently unknown.

There are lots of other options – the South Pacific has lots of islands
– but there are also very big gaps between the options, so if I miss one
I could be out here for a long time. Which would not be good. I have
places to go, people to see. With my book coming out on October 6 and
the march to Copenhagen (for the climate change summit) setting out from
London on October 24, I'm keen to be back on terra firma long before
then.

I don't have as much maneuverability with a rowboat as, say, sailors
have. I can influence but not totally control my direction. Say the wind
is blowing me west (as it is) and I point my boat south (as I do) then I
end up going southwest, or south southwest, or west southwest, depending
on the strength of the wind and, I suppose, the strength of my rowing.

For the last couple of weeks the east wind has been strong –
consistently around or over 20 knots – so my trajectory has been west
southwest. On my current bearing I would miss Tuvalu, passing too far to
the north.

But here's the joker in the pack, or in fact two jokers – the Inter
Tropical Convergence Zone (ITCZ), and the Equatorial Counter Current.
Both will come into play soon. But both are shifting and changing all
the time – see the latest forecast at the bottom of this blog. The
previous forecast was that I would be spared the worst of the ITCZ, but
alas 'tis not to be. It has moved, and now lies in my path. And we won't
really know how it will affect me until I get there. As far as rowboat
voyages go, this is uncharted territory, and the variables are too
complicated to predict with any degree of certainty.

So who knows? I'll keep pushing south as much as I am able, which is the
best way to keep my options open. Failing Tuvalu, other options are
Tarawa, or somewhere in the Marshall Islands, but both would leave me
with a tougher task for Stage 3 of the row next year, which I very much
hope will end up somewhere in Australia..

I should know by now that oceans are no respecters of human schedules.
I've never yet been on an open ocean voyage, either by sailboat or
rowboat, that ended up where it was supposed to be, at the time it was
supposed to be.

And that's just the way it is. To paraphrase Winnie the Pooh's comment
on heffalumps – you never can tell with oceans. .

More wildlife encounters today. I found a dead squid tucked behind my
sea anchor. I think he must have arrived at the same time as the other
two. He was looking a bit dried out and crispy. Not very appetizing.

Then there was a very pretty flying fish that flew in and bounced off my
neck while I was rowing. I would have taken a picture but he was still
very much alive, and it seemed more important to keep him that way than
to ask him to wait for a photo opp, so I swiftly chucked him back into
the blue.

And tonight, towards sunset, there were some birds being very excitable
and noisy, diving down at some fish within a few yards of my boat. The
fact that the fish were huge mahi mahi, about 10 times the size of the
birds, didn't seem to deter them in the slightest. Needless to say, they
didn't catch one, and I don't know what they would have done with it if
they had.

My, what an inquisitive lot you are! Answer 7 questions, get 14 more…
I've made a note of them for future blogs. I don't have time to answer
them all now, but here are some of the quicker, shorter ones.

Someone asked if I have children. Oh do pay attention! I said yesterday
that I don't, and I can assure you that the situation has not changed
since then.

Have I had my appendix removed? No. Let's hope appendicitis doesn't
strike while I'm at sea.

How do I get connection in the middle of the ocean? Satellite phone.
Very expensive, and when used as a data modem, very slow.

More answers coming in future blogs, including the answer to the Number
One Most Frequently Asked Question Of All Time – what do I eat? If I had
a dollar for every time I've answered that one….!!

But seriously, it's nice to know you care. Keep the great comments
coming. Thank you!