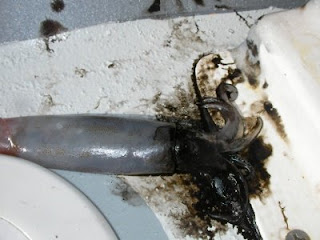 This morning I suffered an aerial bombardment of the ickiest kind. I was
rowing along in the sunshine with my earbuds in, happily insulated from
the roar of the wind and the crashing of the waves, lulled by Michael
Palin's description of his travels through the Sahara. Then, suddenly
and without warning, I was hit by two missiles. One rocketed into the
cabin hatch just behind me, and exploded in a mass of black gore. The
other thudded into the seat runner next to my left leg, and slithered
gelatinously down the deck into the footwell. It was the attack of the
giant killer squid.

Well, ok, so they weren't giant. They were in fact only about 5 inches
long. But they did nearly give me a coronary, so could very well have
been killer.

Dazed, I hit the pause button on Michael Palin and surveyed the
situation. It looked like a cross between a crime scene and Alien. By
the fore hatch, one silvery squid was leaking more ink than I could have
ever expected to fit into one small body. His tentacles were lying in an
expanding pool of black. His slimy body flashed with a few dying gleams
of iridescence as he breathed his last. His friend was quietly expiring
in the footwell. The cockpit was liberally spattered with black body
fluids. I felt rather queasy.

I felt even more queasy at the thought of having to clean up the mess.
I'm not very good with slimy stuff. But I had to get these corpses off
my boat somehow.

So I took out a small measuring jug from the housekeeping locker and,
with my nose puckered in disgust, scooped up the bodies. The one who had
slithered down into the footwell, under my rowing shoes, proved rather
difficult. His tentacles stuck to the jug and I couldn't get to the
smoother, less sticky end of his body. Eventually I managed to scoop up
both sets of remains and deposit them over the side of the boat.

I hadn't even known that squid could eject themselves from the water
with such explosive force. Even if I had known, nothing would have
prepared me for the onslaught of airborne slimy things as I paddled
along, minding my own business. It was all rather shockingly yucky. A
few hours later just the memory was enough to spoil my appetite for
lunch – especially when I noticed there was still black ink dripping off
the fore hatch. Of course it was much worse for the squid than for me.
Let's just say that none of us were happy with the situation.

Don't get me wrong – I do like squid. But for future reference, I much
prefer them battered and deep-fried with a wedge of lemon on the side.

[photo: Eeeuurch. Messy. I hope this doesn't put you off your
breakfast. I can only post one photo per blog via email, so here's the
nasty one. Tomorrow I'll post the pic of the squid that didn't explode
in a mess of ink. Much prettier.]

Good progress today. But I'm still waiting for the wind to subside as
forecast. It's still around the 20kt level. I'm hoping that once it
slackens to around 15kts I'll be able to make a more SSW course which
will set me up better for making landfall. The other benefits of lesser
winds will be that I can once again use the sun canopy to save me from
the worst of the midday sun, and with fewer waves crashing over the side
of the boat it will be easier to keep my still-delicate bottom dry and
free of rashes.

I'm glad that my blog about Michael Jackson seems to have struck a
chord. Some great comments on that – thought-provoking as always. Thank
you.

Stormcloud – interesting perspective. There surely is always room for
improvement, but as you say, lots of room for happiness along the way.
As I have to remind myself on the tougher days at sea, it's important to
enjoy the journey as well as the arrival!

Gregory – I may have to manage your expectations about my MJ dance
moves. I'll use the impossibility of dancing on a rocking rowboat as an
excuse, but in truth I never did get to grips with the moonwalk…

Christa – thank you for the really lovely comment. Made my day!

Maui Bob – good to hear from you. Next time you talk to Marlene, please
tell her that her rawfood crackers are absolutely awesome. Really
enjoying them. Favorites so far are the chia sweet crackers and the
walnut pumpkin. Delicious!

Thanks, Ania, for the great quote. "And if you clear your mind and
cleanse your soul,
listen to what the spirits and nature have to say, and trust yourself
… you will find your own destiny" J.A.H. Very wise words, and yes, it
does sound like the process that I went through. Beautifully summed up.

So the fish was a mahi mahi? And a very handsome fella he was too. If
I'd had a harpoon gun, he might have been in trouble – although I doubt
if it could ever compare with the mahi mahi I had with the Hunks from
the Junk last year. The combination of company, being cooked for – oh,
and being saved from death by dehydration – made for the best dinner
party ever!

What color is the water and can I see far into it? The water is the
color of the sky – whatever that may be – blue, grey, black, pink,
yellow – and it's really hard to gauge how far down I can see. Not to
the bottom, that's for sure!

Have I seen the garbage patch? Last year my row was all about raising
awareness of the plastic pollution in the oceans, so I do know a lot
about it. But I haven't been through it myself. Would have been
seriously off-course if I'd landed up there! But I've heard that there
may be a belt of garbage at the equator. I'll be on the lookout…