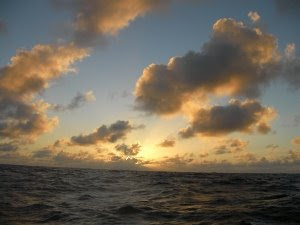 Oh dear. This blog is supposed to be about me rowing across the Pacific.
But today I haven't been me – I have been Michael Palin following in the
footsteps of Ernest Hemingway. That's problem with a really good book.
It totally sucks you in so you forget who you are. And where you are.
And what you're doing.

Since the demise of my stereo I have to listen to audiobooks with
earbuds connected to my iPod in a waterproof Aquapac. So the effect is
even more potent – it's like I'm mainlining the book straight into my
brain.

On the upside, it did make the day's rowing pass much more easily. I
even rowed an extra half hour so I could get to the end. Then I emerged
from the book to find myself rowing along under the stars, rather
disoriented, like I sometimes feel when I come out of a cinema after a
gripping film.

So it was a darned good book. Michael Palin (ex-member of Monty Python
team, also star of A Fish Called Wanda) was commissioned by the BBC to
visit the places where the writer Ernest Hemingway lived – in Chicago,
Key West, Africa, Spain, Paris, Italy, Cuba and Montana. I learned a lot
about Hemingway, as well as what his old haunts are like now.

Hemingway sounds like a powerful character – one of those people I had
in mind when I did my ideal obituary exercise several years ago. He was
passionate, adventurous, larger than life, and intensely alive. All good
things, in my book. Also accident prone and a hard drinker, with a habit
of bagging both wildlife and wives in excess. Not things that I aspire
to (I like to drink, but would struggle to keep up with his prodigious
intake) but the thing I admire about him is that he lived life without
reserve. He held nothing back. He just went for it headlong.

I love to learn about people I admire. It helps me figure out the kind
of person I want to be. Nobody's perfect, and I would never model myself
100% on just one person. But an amalgam of 20 or so different people
creates a kind of idealized role model – the spirit of this one, the
courage of that one, the curiosity of another. It all helps me visualize
my ideal future self. It's fun – like pick 'n' mix for the personality.

Some quick answers to questions raised in comments:

Do I run a light on my boat at night? Yes, I have a solar-powered bright
white light that comes on automatically at sunset and goes off at
sunrise

How often do I wash off the salt from my body? Many times a day! I have
plenty of water from my watermaker, and plenty of sunshine to power the
solar panels that keep it running, so I have more than enough fresh
water to bathe frequently with bucket and sponge.

How do I avoid getting burned to a crisp? I use copious amounts of my
Green People organic sun lotion. I'm nearly through my second large
tube. And I do have a small sun canopy, although I haven't been able to
use that much recently because it's been too windy and it flaps around
when the wind gets over 20 knots.

Do I wear sunglasses? I should, but I don't. My friend Ellen lent me
some really cool glasses but they slide down my nose when I get hot and
sweaty. So I just wear a baseball cap and that seems to do the trick.

How much sleep do I get and how many hours do I row? Sleep is a flexible
concept. I get about 7-8 hours of lying on my bunk each night, some of
which is spent asleep, but it gets pretty bouncy out here much of the
time. Noisy too. As for rowing, I'm taking it easier on this leg. Around
10 hours a day. That's all.

Can I post temperatures? No, not at the moment. I don't have anything to
measure temperature – or at least, I do, but I'm not planning to
download the data from the devices until the end of the voyage. But I do
happen to know that the temperature in the forward cabin (where my
Project Niu device awaits deployment) reached 100 degrees F the other
day. I'd say that's pretty warm.

Eve – I remember! Well done on your dissertation. Glad the photo helps
provide some inspiration. I think we both know a lot about the value of
perseverance!!

UncaDoug – if I see the moon, I'll report it. Do you know what time it
is due to rise on June 23? As for my time zone, I have no idea! I'm
still using Hawaiian time as ship's time, but I don't know what time
zone I am in officially. I suspect I might be an hour behind Hawaii. You
will have to check using my longitude.

Thanks to Anna and Karen for the lovely messages. Anna – I hope the back
gets better soon! You want to watch out for that gardening – truly
dangerous!

Earl-Baldwin – go for it! And good luck with the swimming. You are now
the second adult (that I know of) who has decided to learn to swim after
reading about my adventures. Thanks for letting me know!

Gary – sounds like an amazing project with the Navajo. I look forward to
hearing more about it. Keep me posted!

OK, all for now. Ernest Hemingway has kept me up past my bedtime and I
need to hit the hay.