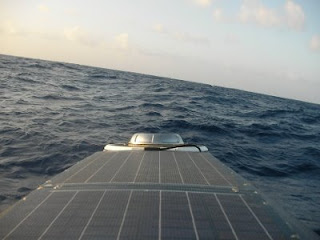 Since Nicole sent me some excerpts from the Golden Gate Endeavour blog,
I've been thinking quite a bit about my friends Chris Martin and Mick
Dawson as they row across the north Pacific from Japan to San Francisco.
And, sorry guys, but mostly I've been thinking I'm happy I'm not you! I
think that rowing an ocean in a pair would be a very different thing
from rowing as a solo.

Mick already has two Atlantic crossings under his belt (both in pairs)
and two failed solo attempts on the Pacific – both of which ended up in
a liferaft. So in determination to succeed this time he has enlisted
Chris Martin, who was the one other solo entry when I did the Atlantic
Rowing Race in 2005.

They are rowing in the shift pattern commonly used by pairs – two hours
on, two hours off, around the clock. I tried this on the Atlantic, and I
found it brutal. The human body (well, my human body, anyway) does not
take kindly to being roused from sleep at godforsaken hours of the night
to go and row. Nor does it respond well to never getting more than about
90 minutes of sleep at a time (it takes a while to get down, and then to
get up again – especially as the north Pacific is decidedly chilly so
the guys are wearing a lot more clothes than I do).

They described in their blog what it is like at changeover time, with
one man desperate to get to sleep and the other trying to drag himself
out of sleep. The resulting lack of coordination resulting in a snack
bar thrown by Mick to Chris landing in the poo bucket. Not good.

I really felt for them. At least my body, sunburned, aching and abused
as it is, gets a decent night's break from rowing and a chance to
recover. And when conditions prevent rowing I get the whole cabin to
myself rather than having to share with a large hairy-arsed crewmate.
Still, each to their own.

Even though Mick and Chris are many hundreds of miles north of me, it's
nice to know they're there. Gives me a feeling of comradeship. So a big
AHOY to the guys, and wishing Mick third time lucky. If you'd like to
follow their blog, it's at goldengateendeavour.com (note English
spelling of endeavour).

[photo: looking out for Mick and Chris – the view north from my boat,
showing the solar panels and aft hatch on the roof of my sleeping cabin]

And a note on ocean rowing:

Not many people have rowed the Pacific. In contrast to the Atlantic,
most of the Pacific crossings have been solo rather than in pairs. The
ones I can recall are:

Sylvia Cooke and John Fairfax in about 1966, from East to West
Peter Bird, E to W
Gerard d'Aboville, W to E
Jim Shekhdar, E to W

And a Frenchwoman, Maude Fontenoy, rowed about half the Pacific, from
Peru to French Polynesia.

I'm sure there are a few more that I can't remember. The definitive
statistics are at www.oceanrowing.com.

Conditions continue rough, with winds of at least 20 knots coming from
the East. I am rowing south, across the waves, which means they often
strike me broadside and give me a drenching. And it's challenging to row
efficiently in such rough seas. But it will be worth it in the end if it
sets me up well for Stage 3 next year, coming in to Australia.

Lazarus the Stereo finally died today. Bit the dust. Kicked the bucket.
Went to the big West Marine in the sky. I'd been managing to coax him
into reluctant action for the last week or so, since he developed a
rebellious streak and decided to ignore all button-pressing. But now he
flatly refuses to work. At all. From now on it's the Aquapac + earbuds.
Thanks to Aquapac for the free gear – seriously much appreciated. Need
to feed my audiobook addiction!

Crave of the Day: a glass of nice cold, ice cold milk

Rave of the Day: the walnut pumpkin rawfood crackers made for me by
Marlene Depierre. Just tried them out for the first time today. Very
yummy indeed!

Thanks for all the brilliant comments. I've just finished reading the
latest batch. I love hearing who you are and what you're doing, what
challenges you're facing and how you face them. Your comments really
help remind me that there is a real world somewhere beyond the horizon!
A wonderful world with some wonderful people. Thanks for being there for
me.