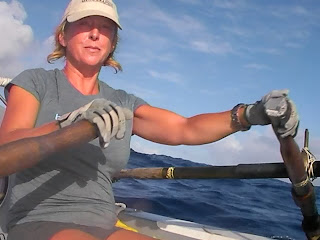 Generally I like to look on the bright side of life, focusing on the
positive rather than the negative. But once in a while it does me good
to have a quick rant, and a problem shared is a problem halved, so here
are my 7 top pet peeves of ocean-going existence:

7. Phantom noises – things that go bump in the night, or click, or beep,
or roll, or knock… and defy all efforts to identify the source of the
noise. Boats are noisy places, with things rolling around in lockers or
swinging against cabin walls, and it can drive a soul to distraction
trying to find out where the noise is coming from.

6. Losing things that, like the noises, can't be found. (Today I found
my shower gel – woohoo! But only one tube, and I know I had at least 4,
and I can't figure out why they aren't all together. Why would the black
hole suck all but one tube through into the parallel universe? The
mystery deepens….)

5. A stereo that won't play when I want it to, and won't stop when I
want it to either. Today before my podcast with Leo I had to open it up
and pull out the iPod from its slot, as the only way to get it to shut
up.

4. Being clobbered around the head by the sun canopy when the wind gets
to over 20 knots. But if I take the sun canopy down I get scorched by
the harsh tropical sun. If only the weather would choose between high
winds and sunshine, but not both at the same time…

3. Dropped satphone calls – Leo and I lost contact during the podcast
this morning, and when I tried to call him back my phone just kept
saying "Please try later". Doesn't it KNOW when I'm on an important
phone call?!

2. Finding decomposed flying fish in unlikely corners of the deck. If
they don't get returned to the waves pretty soon after death, they go
rather crusty if in sun, or horribly slimy if concealed behind sea
anchor or liferaft, or if hiding in the bilges. Yuck!

1. Inconsiderate waves that come crashing in unannounced just as I've
switched over to a fresh, dry seat cover. Or while I'm preparing my
lunch. Or at an otherwise inconvenient moment. They watch, they wait,
and then they come and get me. Or am I just getting paranoid?!

Phew, feels better to have got those off my chest. In the interests of
balanced reporting, tomorrow I will try and come up with 7 good things
about being on the ocean.

And here's another pet peeve – winds that blow me the wrong way. If you
look at my route on the RozTracker you'll see that in the last 24 hours
it has taken a sudden jag to the west. This is very strange. The wind is
coming from the same direction, the rudder is set the same as it has
been for the last week, and as usual I have been rowing with my bow
pointed due south. But instead of heading nicely SSW, suddenly I am
going due W. Not amused!

On a more positive note: we're talking with Archinoetics about the next
incarnation of the RozTracker. We are compiling a wish list to see what
might be possible. I think it would be fun to use a motion sensor so you
can see how much my boat is pitching about on any given day, maybe with
a little gauge like they have in airplanes so you can see how my boat is
moving relative to the horizon.

If you've got any special requests for features you'd like to see –
weather, moonphase, whatever – then let us know. Please send your
suggestions to roztracker@rozsavage.com. We can't promise that they will
all be feasible, so let's look on this as a brainstorming session.
There's no such thing as a bad idea. Apart from the ones that are.

I'm uploading my latest video contribution as I write this, featuring
some rowing action. Dawn will probably have it edited into the prepared
shell and live on YouTube in the next 12 hours or so – so look out for
it there!