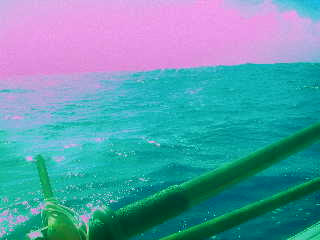 Seems that so far this voyage's blog has been dominated by boobies,
bums, and bird poo. I felt it was time to raise the tone a bit, and talk
about my boat – or, more specifically, some of the people who have
worked on her.

I often feel like a bit of a fraud when I claim to be a "solo ocean
rower" because although the rowing bit is totally down to me (sigh… if
only it COULD be delegated, at least a bit of it!) there are countless
other people without whom I couldn't do what I do. Literally hundreds of
people give me support – financial, technical, psychological and moral.

Today I'd like to single out a few who have given very practical
support. I hope they don't mind. I know they didn't do it for the
recognition – and certainly not for monetary reward, because there
wasn't any.
I think of them often as I look around my boat, and see the evidence of
their contributions.

Ian Tuller is a retired educator living in San Francisco. He emailed me
some time back to introduce himself and offer some help. As well as
letting me stay on his boat and drive his car while I am in the Bay
Area, he came out to Hawaii to help work on my boat. Twice.

Ian is an amazing can-do kind of guy. He just gets on with it. I was
being a bit of a wimp about stripping all the defunct electrical
equipment off my boat – a clutter of stuff had accumulated over the
years, most of which had worked briefly before falling victim to
saltwater corrosion. "But we might be able to fix it," I pleaded. "We
might," he said, "but if it broke the first time it's going to break
again." The logic was irrefutable. The broken kit was duly stripped and
went to the next boat jumble.

I think of Ian each time I admire the clean lines of my newly
uncluttered cabin roof, where much of the dead stuff used to live.

And each time I look at my nice clean deck, newly painted in Seattle
Grey, I think of Liz Fischer, who I met for the first time only about a
month before I left from Waikiki. A professional woman and enthusiastic
paddler, Liz connected with me via Facebook. I don't know how we'd have
been ready in time without her help. No task was too big – or too small.
Sometimes it's easier to find someone to paint a deck than to find
someone to do the mundane, unglamorous jobs like buying batteries. Liz
would just dismiss all proffered thanks with a brisk "Girls gotta help
girls."

And last but not least, huge thanks to Scott Burgess, who I met at the
Ala Wai Paddling Challenge earlier this year. As well as being the
possessor of the most distractingly amazing set of abs I've ever seen,
Scott has been incredibly generous with his time and energy. During the
couple of months that I was away on the mainland, Scott toiled away in
his spare time in the Black Hole of Calcutta that was Pier 21 – the only
place we could find to store my boat at the time, a gloomy, grimy
warehouse – chipping away at the long To Do list. He also stored the
unbelievable quantity of stuff that came off my boat in his small
apartment. I think I had more possessions there than he did.

Scott got the worst job of all, the one nobody wants to do – sanding and
repainting the bottom of the boat. Covered in blue paint dust and
wearing a white paper overall, he looked like a hard-working Smurf. A
Smurf with great abs. Did I mention those already? (Sorry to embarrass
you, Scott!)

I can't possibly name everyone else who helped out, but would just
quickly like to acknowledge Morgan Kavanaugh, Ellen Petry Leanse, Aenor
Sawyer, Melinda Griffith, Nancy Glenn, Lyla Kempker and Brian Bilodeau,
all of whom contributed their unpaid labor during those last frenetic
days on dry land. I see little signs of your care and affection all
around me on this boat, and it helps keep me motivated to know that you
all believe in me.

And if any of you can remember seeing my shower gel on board…. Let me
know where to find it!

[Photo: I think my trusty old Pentax Optio WP is on its way out. This
photo I took today is looking decidedly psychedelic. And the ocean
wasn't. Sigh. That's the second camera I've killed so far this trip….]

32 miles today – not bad. Conditions rough but I've been in worse. Heat
continues to be the main issue.

Nicole sent me some extracts from the blog of GoldenGateEndeavour.com –
my two friends Chris Martin and Mick Dawson who are rowing the north
Pacific from Japan to San Francisco. They are suffering from the cold –
woolly hats and warm socks being their most cherished items. While I
swelter. Funny to think we're on the same ocean. But also quite
reassuring, in a way. They're a couple of thousand miles north of me,
but nice to know I'm not the only lunatic out here!

Thanks for a great batch of comments on my last blog. Too tired to reply
to all (and need to get off my bum – still taking good care of it), but
here are a few hellooos:

Sindy – so my average is up to over 30 miles a day. Woohoo! (not in
danger of breaking any water speed records any time soon though!)

Beau – getting a bit crowded on this rowing seat. You might have to take
the night shift!

Pegola – hi to all in Hood River. And have fun at the Guac Off! I hope
to be there in October on my book tour – see you then?!

Daniel Dion – I can't believe I've managed to connect with someone in
Gravelbourg! Your town, I'll have you know (with a smile) was the bane
of my planning exercise. About 1000 miles out of my way, the back end of
beyond, on the way to nowhere. Exactly the kind of place I would LOVE to
visit! I will be sure to look you up if I get around to my Johnny Cash
adventure.