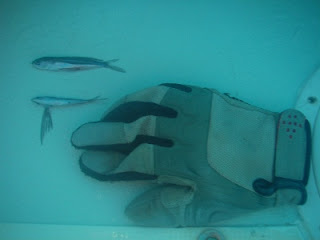 This morning when I went out on deck, it was dotted with the little
corpses of about 10 flying fish. It was my solemn duty to give them a
burial at sea, by picking them up and rather unceremoniously chucking
them over the side. It's a sad and rather slimy chore, and a sure sign
that the seas are getting rougher.

Most of the fish, as far as I can tell, don't arrive by flying –
although occasionally this does happen, as I know from the times when
I've found myself on the flight path and have been struck on the side of
the head by a flying fish, to our mutual surprise.

No, most of them come up through the scuppers. The scuppers are six
little oval holes arranged along the sides of my boat at deck level,
each with an elasticated trapdoor. The idea is that these trapdoors act
like valves, allowing water to escape from the deck but not allowing
water back in.

But it doesn't always work that way. Forceful waves sometimes burst up
through the scuppers, bringing a flood of seawater and a few unfortunate
flying fish, seriously spoiling their day. One minute, there they are
swimming along, minding their own business. The next moment they're
lying thrashing on my deck, probably failing to appreciate its fresh new
coat of paint in Seattle Grey.

If I'm on deck when they arrive I try to throw them back in before they
asphyxiate, but I rarely succeed. My attempts to pick them up send them
into a frenzied wiggle that makes them impossible to get a hold of. So
they die. Over the side they go, to be recycled as somebody else's
dinner. That's life.

Hmph. Most indignant. Back to business as usual today, with a full day
at the oars. But I wonder why I bother. I did the same number of miles
today (full day of rowing) as I did yesterday (2 hours rowing before
sore bum stopped play). So I can only console myself with these facts:
1. I would have gone even fewer miles if I hadn't rowed all day
2. I'm still 24 hours closer to my goal
3. It could be worse – I could be a flying fish randomly washed up
on the deck of a passing rowboat.

The good news is that the posterior was perfectly well-behaved today and
caused no trouble. Time is a great healer – as is hydrocortisone. And I
reconfigured my seat cover too, which may also have helped to some
extent.

I can't find my shower gel. I had about 6 tubes of Mint and Tea Tree
Shower Gel – my absolute favorite – to use when I've finished my current
tube. And I can't find them. They're not in the same locker with all the
other toiletries, sun cream, wet wipes, toothpaste, etc. So if they're
not there, lord only knows where they are. Probably hiding out with my
second deck bag and Kestrel wind gauge, wherever those ended up. Maybe
on board, maybe not. Sigh. Amazing how easy it is to lose stuff on a 23
foot rowboat. I swear some of these lockers have black holes in them
that swallow my stuff and spit it out into a parallel universe.

Thanks for the comments on yesterday's blog about the list of
adventures. Peter Corless – your idea of the Welsh B&B sounds absolutely
wonderful. I know a couple of fantastic B&B's in Devon that would
probably serve just as well. Must add that to the list!

Also great to hear from cousin Juliet, adventurer Leven Brown, Michelle
Urquhart from NZ, and Sindy and her new t-shirt – and everybody else as
well, of course! Thanks for all the feedback – I can't tell you how much
it means to me to know that you are all there and pulling for me!!

Weather forecast, courtesy of weatherguy.com: as for yesterday