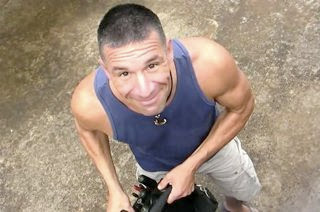 It has been a busy 24 hours here in Hawaii – mostly boat-oriented, with internet sessions topping and tailing the day. I was up at 5am editing my latest podcast of Roz Rows The Pacific, featuring an interview with Lynne Cox, extreme swimmer and author of Swimming To Antarctica. Watch out for the podcast going live within the next week – I email it over to Leo Laporte and he and his trusty staff at TWiT.tv upload it to iTunes.

Then I swooped via a quick internet session at the Coffee Gallery in Haleiwa (and a much needed mug of java) to the Brocade’s current location on the North Shore. For today was the day that all hands were on deck and work started in earnest to get the Brocade ready for Stage 2 of my Pacific row, due to launch on May 15.

I had already tentatively decided on a new strategy of KISS (Keep It Simple Stupid). For past stages of the row I had the boat wired for GPS, sound and video – only for most of the equipment to fall victim to saltwater corrosion. Rolling the boat 3 times in 2007 and once in 2008 hadn’t helped. Water had got into all kinds of places it had no right to be. And every time I opened up the back of the control panel it made me want to have a nervous breakdown – it was such a nest of (electric) vipers that maintenance at sea would have been very challenging, to say the least.

So I had decided that it would be more sensible, less stressful and less wasteful to use more standalone items, which would be not attached to the boat but rechargeable via the onboard batteries. Only the bare minimum would be left as permanent installations.

But it still took a considerable amount of courage to rip out a large proportion of the existing electrics. Even things that hadn’t worked in years caused pangs of nostalgia. But once I got into the swing of it, I became quite ruthless. If in doubt, chuck it out! A lot less junk to lug across the ocean. All discarded items will be offered to others via Craigslist or boat jumbles, so they won’t go to waste, so it made me feel less guilty to remember that one man’s junk is another man’s treasure.

By the end of the day, the chaos of wires behind the control panel was reduced to manageable and less panic-inducing proportions. Brocade was looking stripped down and back to basics. Now we have a clean slate to bring in the new kit, partly donated by sponsors and partly funded by your recent very generous donations – thank you!

So in one sense there were 5 of us working on the boat today – Ian from San Francisco, Scott (pictured) and Morgan from Hawaii, while Morgan’s girlfriend Ali recorded our labours for posterity, and me of course – and in another sense you were all there too. I knew you’d be interested to hear how we are getting on, which is why I am sitting here in the internet cafe, posting this blog, even though I am zonked and looking forward to an urgent appointment with my pillow before we start work again tomorrow. But I wanted you to know that we are going great guns here, and hope to have the Brocade looking much more shipshape by the end of this week.

Ocean in Google Earth launched today. I was invited to the launch event in San Francisco, and would have loved to go – Al Gore was there! But I was here in Hawaii with important work to do, and just couldn’t justify the extra airmiles or cost of being there. But I am in ongoing talks with Google and hope to contribute some content to an expeditions part of the new Ocean functionality.

Check out these sources (and thanks to Ellen and Leye for these) – it all looks very cool!

Article in The Guardian

I’ll be watching with interest to see what new content goes on in Ocean – in the hope that Google will be contributing to the growing awareness that it is COOL TO BE BLUE!