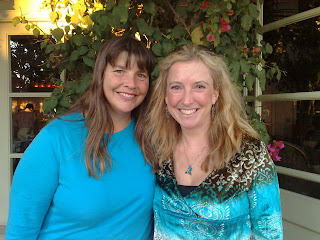 Today you had a life-changing experience. You might even be having one right now. It may have been your life, or it may have been someone else’s life, and you may or may not have been aware of the fact. But to be sure, today you did something that affected somebody, somewhere. Most of us never find out the impact that we have – but occasionally we do.

You might recall that a few weeks ago I blogged about Tom Hernon, who despite being paralysed from the waist down still skis and coaches – and is putting his workshop at my disposal to fabricate replacements for the metal parts of my boat that have rusted or broken. It turns out that Tom wanted to repay a favour that I didn’t even know about. He wrote me this, about his wife who was suffering from cancer and undergoing chemotherapy.

“I want to tell you a story that will explain my enthusiasm for this project…As you know from my bio I raised my son from the time he was 2. When he was 18 (2003) I got remarried. In 2005 my wife was diagnosed with cancer, we shut down the business and started our fight to save her life.

One day she told me she saw a story on TV about a woman that rowed across the Atlantic and admired what she had done. About a month later she was too tired to go to the doctor, so to motivate her I said, “If that lady can row across the Atlantic you can get out to the car”. It worked, she got up and made it to the clinic.

I remember several times when she was struggling at something because of her illness, she would look over at me and I would give her the rowing motion and it would make her smile even know the pain was unbearable.

After she died I was going through her computer and found your website bookmarked, I remembered the motivation your trip gave her and that’s why I emailed you and offered my help. When I found the bookmark I realized how much she was following what you were doing and I am sure It gave her some extra strength to fight on.

This is a very personal story that I have kept to myself for a long time, I wanted to tell it to you so you could see the effect you had on my life without even knowing it. I am glad that I went through her computer and learned your name and I am sure she would be proud of me for helping you…I am sure she is not the only woman whose life you had a positive impact on. Try to remember that when you are out in the middle of the ocean and need a reason to keep going.

One of my favourite books is The Five People You Meet In Heaven, by Mitch Albom. It is a short book, but had a great influence on the way I saw the world. (So there you go, Mitch Albom changed my life – even though he and I will probably never meet.) In it, Eddie meets five people whose actions had a huge impact on the course of his life – even across time and space – and in some cases he doesn’t even know them, and it takes a while to figure out how their lives were connected.

Or in the recent film, The Curious Case of Benjamin Button, there is a whole sequence leading up to Daisy’s accident which goes: if the truck had moved out of the way sooner, if the passenger had got a different taxi, if the package had been ready for collection, if the shop assistant had not had a row with her boyfriend… the accident would not have happened.

What intrigues me is: in such a complex and interconnected world, where we can’t possibly know all the consequences of our actions, how can we be sure that our impact is a good one?

On Saturday I finally got to meet Lynne Cox (pictured), long-distance swimmer and author of Swimming To Antarctica and Grayson. As we sat in the sunshine on Santa Monica Pier I interviewed her for a forthcoming podcast. When I asked her what her most special experience had been, she cited her swim across the Bering Strait from Alaska to the Soviet Union. Her aim was, and still is, “to establish bridges between borders” – and her Bering swim helped break down the barriers between the two then-existing superpowers. She is one very special lady.

Later that evening I had a drink with Sindy Davis, supporter and now friend. We went on to dinner with JUNK rafter Marcus Eriksen, his fiancee Anna Cummins, and Captain Charles Moore of the Algalita Foundation that has done more work than anybody to investigate the North Pacific Garbage Patch. I am planning to be in Vancouver in early April for a joint event with Marcus and Anna as they set out to cycle from Canada to Mexico – again with a mission to raise environmental awareness.

Yesterday I was the guest of honour at a brunch here in Mar Vista, invited by some friends I made last year in Hawaii. Great food and great fun chez John and Sarah de Heras – huge thanks to them and to their guests who contributed so generously to the very depleted expedition coffers. (If you feel moved to help too, you can donate online via the Blue Frontier Campaign – be sure to select “Roz Savage – the Voyage” from the dropdown box. Thank you!)

And yesterday evening I met up with Angela Madsen, paraplegic ocean rower, shortly to embark on the Indian Ocean. If anybody dares to claim that they would love to have an adventure, but they’re not up to it physically, take a look at Tom Hernon and Angela – and see if you still feel the same way!