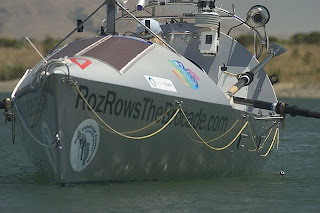 Timing is everything. If I’d have lived my life the other way round – doing my adventuring in my twenties and then settling down to a conventional life in my mid-thirties – I wouldn’t have had the tools to share my adventures with an online audience. In the early Nineties, mobile phones were the size of housebricks, laptops were luggables, and email was in its infancy. Mobile computing was almost non-existent, and when sailors disappeared over the horizon that was pretty much the last you heard of them until they arrived – or didn’t – at their destination.

I graduated in 1989 – and I’ve been doing a bit of research to find out the timeline of what has happened since then:

So if I’d been adventuring back in 1989, my capacity to share the adventure would have been restricted to a few newspaper articles and maybe a book, and any communication from the ocean would have to be sent back to land via passing ships. Now, I have a plethora of tools at my disposal, and during my voyage I’ll be making the most of them, through this blog, Twitter, podcast, video and Facebook. And of course my website at www.rozsavage.com, which will show a map of my sedate progress across the Pacific Ocean.

However, technology is both a blessing and a curse. I’m going through a bit of pain right now, trying to get everything up and running before I launch in 3 weeks time, despite a few issues both technological and human. And my spare satphone has gone missing somewhere in the multiple moves of boat cargo.

I hope that everything will come together so I’ll be able to share the adventure with you in all its multimedia glory – without the seasickness!

Pictures: top – the high tech version. In 2007 I was doing all kinds of data gathering, requiring a profusion of paraphernalia. With all this weight up top, no wonder my boat capsized…

bottom – the stripped-down version. We actually took all the fixtures off to allow for repainting, but very little technology will be going back on beyond what you see in this picture. The new strategy is to have very few electronics fixed to the boat – saltwater and sensitive electrical equipment are not a happy combination, so I will be taking mostly handheld devices that will be put away in Aquapacs when not in use. The new strategy is: Less is more/KISS (keep it simple stupid!) 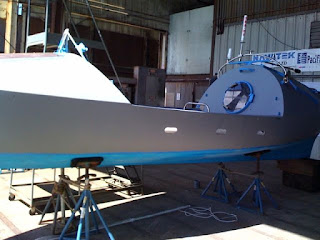