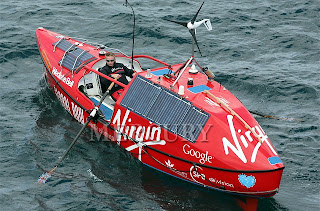 On certain Facebook pages you have to enter randomly-selected words to prove that you’re a human being. This morning I was faced with the stark words “LARGER” and “DEBT” – not a happy combination, and a reminder that with less than 4 months to go until launch date the expedition coffers are empty.

And today has continued to be, well, just one of those days when I feel like crawling back under the covers and waiting for better times to arrive.

Indulge me a moment while I share my pity party. Despite dozens of inquiries, I still have nowhere under cover to store my boat. I want to work on the boat today, but it’s pouring with rain here in Hawaii. Several projects are running behind schedule. Various technological questions are still to be answered. And there is no money to throw at the problem.

And then somebody posts an ill-informed comment suggesting that I should give it all up. I can’t blame them for being ill-informed – I haven’t yet announced my big, exciting environmental initiative for this year – but although I know that “it is not the critic who counts” it was unfortunate timing and it hurts to be kicked when I am already down.

So how to deal with these days of gloom and grey? I have retreated to the Kalapawei Café for some coffee shop therapy with my journal and a latte. I’ll share part of today’s entry:

“It’s one of those frustrating periods of stuckness when it seems nothing can possibly be finished in time…. Until the stuckness ends and is succeeded by a period of rapid progress and dizzying change. I haven’t yet figured out a way to trigger that transition, apart from just to keep plugging away until things start to flow again. If it was easy, everybody would be doing it. Keep doing the right things for the right reasons. Know that I feel a calling to do this – and that there is nothing else that I can do but to keep faith in the process, and know that it will all be worthwhile – eventually.”

Today Oliver Hicks set out from Tasmania on his bid to be the first person to row solo around the world. His voyage around the Southern Ocean is slated to take 500 days. “New Zealand safety authorities said Hicks was exposing himself to extreme risk and the likelihood of a rescue being needed was significant.” Good luck, Ollie – you know more than most about rowing in the colder latitudes, and I wish you all the very best. You can follow Ollie’s adventure here.

Since arriving in Hawaii I have been busy networking, picking up contacts from previous visits, and making many new friends, notably at Sunday’s Ala Wai Challenge. Thanks to Jeff Apaka for inviting me to appear at the event, and thanks to all who showed such interest in my adventures both past and future. I am looking forward to working with all my Hawaiian friends in the run-up to my launch on May 15.

If you’d like to cheer me up, a few dollars would help brighten my day. Every $ counts – as does the knowledge that you care enough to share. Donations can be made here via PayPal.

A couple of new podcasts have gone live in the last few days, so by way of apology for not having blogged for a week, here is more than enough Savage Verbiage to keep you going! Me in conversation with my friend and Podcast Sister Anna Farmery…