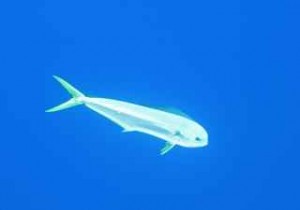 I’ve been trying, but I just can’t regard the chaps downstairs as dinner. Some of you have been suggesting that I should get the fishing line out while I have the chance and the mahi mahi are milling around beneath my boat, but I just can’t do it.

There have been at least five fish, possibly more, keeping me company today. Occasionally they leap into the air and do a backflip, but mostly they just mooch around a couple of feet beneath the surface. They are very pretty. I don’t know if mahi mahi can iridesce, or if they just catch the light occasionally, but sometimes they seem to glow with a silvery blue aura.

, in which the poor guy is floating around in a liferaft for 79 days. A group of mahi mahi congregate beneath his raft, and he catches them with his harpoon gun. He said it was as if they sensed his desperation, and offered themselves up to him, even after they saw their fellow fishies killed by his weapon. They were his only food. I’m not in such dire straits, so I don’t feel I can justify the killing. Hypocritical, I know, as I was happy to eat mahi mahi when Marcus and Joel of the JUNK Raft caught one for our dinner party a few hundred miles east of Hawaii. But it’s somehow different when the death would be at my own hands.

On a different note, I wonder why Sarah Outen had pilot fish beneath her boat as she rowed across the Indian Ocean, but I’ve got mahi mahi. Her boat was a little smaller, but I can’t imagine that has anything to do with it. I saw a pilot fish or two early on, but the mahi mahi are my faithful followers.

It’s hard to explain, but it does give me some small sense of comfort, knowing the chaps are there. It’s not as if we have much personal contact – mostly they stay down there and I stay up here. But company is not easy to come by out here, and they are all I’ve got. Rowers can’t be choosers.

Progress today has been dismal. I’ve been rowing all day, but with adverse winds and currents have made only 7 miles to the good. But the other night I made 22 miles while I slept (or at least lay on my bunk) while big waves shoved me along. So I suppose it all averages out – but these slow days can be a bit challenging to the morale.

Cynthia Kruger – thank you for your factoid about the dominance of the big players in the food industry. Also a good point about fossil fuels being used in the manufacture of solar-capture equipment. But as Thom Hartmann suggests in “The Last Hours of Ancient Sunlight: Revised and Updated: The Fate of the World and What We Can Do Before It’s Too Late

, maybe that is exactly what we should be using our remaining oil for, rather than sticking it in our cars and burning it. At least it will help the transition to the new era pending our invention of a better way to produce durable materials as successors to plastic.

Michael – thanks for your input on the food debate. It brings us around to the sticky issue of population. If there were fewer of us, small scale farming would start looking more feasible. But that is a whole other topic…. I agree with your comment on actually doing something versus being seen to be doing something. I fear we mostly tinker around the edges, fiddling while Rome burns.

UncaDoug – your quote from Gus Speth: “Working only within the system will, in the end, not succeed when what is needed is a transformative change in the system itself.” reminded me of Einstein’s maxim that problems are rarely solved using the same thinking with which they were created (or words to that effect). We truly need some fresh thinking.

StinsonBeach – my mahi mahi don’t seem to be very solitary. There is quite a little club of them down there. Maybe Indian Ocean mahi mahi are just more sociable?! As to the “pure thought”, errr, wow. I will have to, errr, think (!) about that.

Quote for the day – from our friend Albert Einstein again: “A human being is a part of the whole, called by us ‘Universe’, a part limited in time and space. We now experience ourselves, our thoughts and feelings as something separated from the rest, a king of optical delusion of our consciousness. This delusion is a prison for us. Our task must be to free ourselves from this prison by widening our circle of compassion to embrace all living creatures an the whole of nature in her beauty.”

Sponsored Miles: Grateful to Steve Maskell for sponsoring some of yesterday’s miles, as well as today’s.