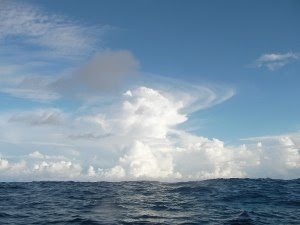 Q: (from stormcloud) So, I have a question about the motive behind
saving the planet, or however it's called. I've been told that humans
are a scourge on the planet, we're so evil and uncaring, and stuff like
that–but, aren't we part of nature, too? Isn't everything we do a part
of Mother Nature's plan, plastic and all? Don't get me wrong, I do
believe we should do everything to take care of the planet . . . but are
we really taking care of it? Or are we just making it better for
ourselves? I'm sure life would learn to exist on a planet with a sick
atmosphere, and some plants might die from cleaner air. Who knows. These
thoughts and stuff have been kind of confusing me for a long while, but
I've never been able to ask anyone about it. So, what's your take on
this? I don't know if it's a too complicated question or not, because I
honestly don't know that much about enviromental, er, stuff (good thing
I've found your blog, no?) so, answer at your own leisure!

A: This is a great question. I don't claim to be an expert in
environmental matters, but I think that the issue has often been clouded
by too much information. It's basically a very simple issue (although
not necessarily with simple solutions) that requires nothing more than a
bit of objectivity and common sense. Some of what I'm about to say might
be a bit controversial, but here is my humble opinion….

The eco-green-sustainability movement is usually assumed to be talking
about saving the planet, but the planet doesn't need saving. We humans
have made a right royal mess of it in the short time we've been here,
but the Earth has been through worse and survived. Give it a few
millennia and the planet will be just fine, the brief human infestation
just a bad memory.

Because Stormcloud, you're right – the issue isn't about saving the
planet, it's about saving humankind. At the moment we're killing
ourselves slowly, by a thousand million cuts. Why did we ever think it
would be okay to pollute and poison our natural habitat? When there were
just a few million of us, and all our waste was biodegradable, it didn't
matter too much what we did – our impact was still negligible. But now
there are 6.5 billion of us, consuming like crazy, and much of our waste
lasts a very long time. Our attitude to consumption has changed (more,
more, always more) but our attitude to disposal hasn't.

And it's coming back to bite us.

You ask – aren't we a part of nature too? Yes, we are, but we've been
given special abilities and inclinations – or at least an opposing thumb
and an extra-large brain – that set us apart from other inhabitants of
the natural world. And – most important of all – we have been given free
will that allows us to decide how we are going to use our special
status.

I believe this is the key to it: we need to use our unique ability of
self-awareness to step outside ourselves and see with clarity what we
are doing. Right now, our behavior suggests that we are short-sighted,
arrogant, and addicted to conspicuous consumption. But we can also be
creative, inquisitive, ingenious, and endlessly amazing. We have so much
worth living for, it would be a tragedy if we continue our path towards
collective suicide.

We need to rise to be our better selves, using our free will, our power
of reason and our inner wisdom to get ourselves out of this
unsustainable situation. We already have all the technologies we need to
create a sustainable future. We don't need to wind the clock back to a
pre-industrial age – better instead to forge ahead and create a new
style of living that combines the best of the old with the best of the
new, allowing us to live in balance with nature in a way that is
infinitely sustainable.

It's time we woke up to what we're doing and did something about it. My
interest in sustainability is utterly selfish. I want to live a long,
healthy life on a pleasant, clean, thriving planet. And I'm willing to
do whatever I can to help make that happen.

[photo: a lovely cloudscape during the best part of today's
ever-changing weather]

A mixed bag of weather today. I woke up to leaden skies and dismal rain
that looked like it wasn't in any hurry to go anywhere. But it did – by
this afternoon I had the sun canopy and was enjoying an amazingly varied
cloudscape. Conditions weren't conducive to major mileage, but I made
another 10 miles or so towards the Equator, and a useful bit of
eastwards too. Another squall tonight (so still no crescent moon
sighting – sorry, UncaDoug!), so the weather still has a few tricks up
its sleeve, but all in all, a good day at the office. (But uh oh, as I
write this I see I am being pushed north. But I can't row all night –
I'll just have to suck it up and deal with it in the morning…)

Eco Champ of the Day award goes to Steph, who is doing one of the BEST
things you can do to reduce the amount of plastic you use:
"I wanted to let you know you've inspired me to stop buying bottled
water, and use my own bottle instead."
I do this too, when I'm on land. I use a Brita water filter jug that I
keep in the fridge, and just top up my water bottle. Or get them to
refill it in the coffee shop or gas station. It's no hassle, and saves a
LOT of plastic.

Thank you to all the Rozlings for the wonderful comments. It's great to
see how many people are reserving their Larabar bookmarks. I'm doing my
side of the bargain by munching my way through 4 a day here – tough job,
but someone has to do it! I've got quite a bagful of wrappers
accumulating and when I get back to dry land we'll set to work signing
and laminating. Thanks also for all the words of encouragement,
environmental wit and wisdom, and everything else. I feel that I have
some true friends back on terra firma.

Sue the Psychlotherapist of Cirencester – lovely to hear from you. For
sure I will drop in the next time I am in your part of the world. Last
time I was so grateful for your warm hospitality – and the laundry
service!

Lorrin Lee – thanks again for the goodies you bought for me in Hawaii
just before I left. I found the spirulina crackers by Go Raw a couple of
days ago. They were SOOO good!

Q: Is there a reason you are not eating fish you can catch or squid that
land on the deck, for instance, to add to your diet (and diversity of
activities)? Are you a vegetarian?
A: No, I'm not vegetarian. But I would have defied anybody to find an
appetite for the roadkill squid! As for fishing, I just don't really
fancy it. Not until necessity dictates.

Q: What do you dream?
A: A lot of random stuff – often about food! And it's amazing some of
the people that pop up in my dreams, people I haven't even thought about
in years. Quite fun – like a trip down memory lane!