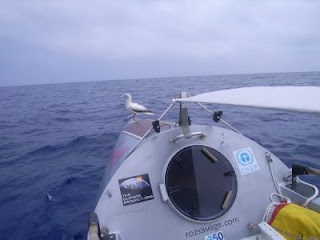 Today was a good day for mileage. According to my logbook, I've covered
38 nautical miles (a nautical mile is 15% further than a statute mile)
and I crossed the line of latitude at 20 degrees north. I'm a bit
mystified as to why the mileage was so good – for most of the day there
has been very little wind, and I put in the same number of hours (10) as
usual, so there must have been a favorable current. Whatever the reason,
I'll say thank you very much, and I'll have some more of the same,
please.

This afternoon the water was so calm that it felt almost like rowing on
a river. I used to row crew at Oxford University, and then for a few
years afterwards at Thames Rowing Club in London, and I loved those days
when the water was flat and the eight would be flying along. No
splashing, timing perfect and precise.

For a few hours this afternoon rowing the Pacific felt much the same.
Obviously these days my crew is reduced to one, and even the calmest day
there is a bit of ocean swell, but the boat was sitting level and the
rowing felt comfortable and almost (dare I say it?!) enjoyable. I'd
better keep quiet about this or everybody will be out here having a go!

As is becoming my habit, I hopped over the side a couple of times to
cool down with a refreshing swim. I really just want to be in the water,
and definitely don't want to lose the boat, so I either swim laps of the
boat, sticking close by, or else just hang onto the grablines and enjoy
the relative coolness of being in the ocean – and a change of scenery
from being inside the boat.

It's quite a strange feeling, to look across the surface of the water
from as close to sea level as it's possible to get, and imagine just
what lies beneath me. Not sure what the ocean depth is here, but it
could be up to 2 miles – definitely out of my depth, anyway! Literally
rather than metaphorically. It would be nice to picture the
waters teeming with life, although alas there is probably nowhere near
as much life as there would have been just a couple of decades ago,
thanks to our impact on the oceans.

It also occurred to me that I was quite probably the first person ever
to swim in this spot. I found that a fascinating thought – until I
realized that almost for sure I'm the first person ever to row across
this spot. I'm sure there are lots of places on earth where it's
possible to be the first human being in a particular location, but I
haven't been to very many of them, so this thought made me feel quite
special.

P.S. For those who followed my adventure last year and recall me having
some difficulty getting back into the boat, I now have it down to a fine
art. Just in front of the aft cabin, the two oars – one in the guardrail
position and the other in the oarlock – provide a useful hand ladder. So
I grab hold of the lower oar, put my foot on the grabline rope that
loops around the side of my boat near the water, then put my weight on
the foot and grab the upper oar. From there it's easy to swing my other
foot over onto the gunwale and get back on board. Hey, maybe I'm getting
the hang of this ocean rowing thing! 🙂

[Photo: another shot of my feathered friend – for more info see below.
Sorry – I was going to take a water-level view of my boat, but my camera
battery had gone flat – doh!]

Books of the Day: listened to Julian Barnes's "History of the World in
10 1/2 Chapters" – brilliant. I read it years ago, during my old life in
London. The "Parenthesis" chapter (the "1/2" of the title), about love,
got me feeling quite sentimental…

Then up came Steven King. Don't know what possessed me to put SK books
on my iPod. "The Talisman" was being read in a rich American voice that
at first sounded really corny but then actually got quite scary, and I
decided it best to skip the rest and move on. Now back on Julian Barnes
and his autobiographical, and reassuringly titled, "Nothing to be
Frightened of". Phew.

Thanks today especially to:

– Marlene Depierre for the amazingly yummy and wholesome rawfood
crackers. She has made me a huge variety, all lovingly vacuum sealed and
labelled. The sunburgers are absolutely fantastic!

– Living Nutz – the Bodacious Banana Bread Walnutz are just amazing. How
can something this delicious also be healthy?!

– Mum – lovely to speak with you this morning. Thanks for the screen
shot of the RozTracker. Great to see what it looks like now it has live
data – now I don't feel so left out!

Rob Moir from the Woods Hole Oceanographic Institute for this feedback
on yesterday's hitchhiker:

"The bird on your boat is a fantastically good omen! I am so envious
you being permitted to be so close for so long to such a bird.

The bird looks to me like gannet which I see in the Atlantic. I
think the bird on your rail is a Masked Booby.

This is the largest booby, at 81-91 cm length, 152 cm wingspan and
1500 g weight. Adults are white with pointed black wings, a pointed
black tail, and a dark grey facemask. The sexes are similar, but the
male has a yellow bill, and the female's is greenish yellow; during
the breeding season they have a patch of bare, bluish skin at the base
of the bill. Juveniles are brownish on the head and upperparts, with a
whitish rump and neck collar. The underparts are white. Adult
plumage is acquired over two years.

The Masked Booby is silent at sea, but has a reedy whistling greeting
call at the nesting colonies. While on the breeding grounds, these
birds display a wide range of hissing and quacking notes."

My visitor made a "rrrr rrrr" sound a few times – not sure how this fits
in with the above, but he was very pretty regardless. Thanks, Rob.

{And no predictable jokes about boobies, please!)

Weather forecast, courtesy of weatherguy.com:
The low pressure system north of Hawaii that has disrupted the trades
will move towards the far NE. High pressure fills in the north of the
islands.

Expect weak ENE-Eerly trade winds for Saturday and Sunday and slowly
increase on Monday. Midweek, expect winds in the 20kt range and wind
waves to build to 6 ft.

Sky conditions are mostly cloudy with mid to low level clouds. Isolated
to scattered rainshowers. Partial clearing after 31May.