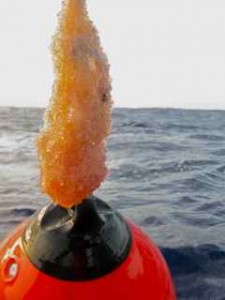 Late this afternoon I was pulling in the sea anchor, and got quite a surprise. Last year on the Pacific the sea anchor drew in a very exciting visit from a baby whale shark, evidently fascinated by the big red-and-yellow jellyfish-like thing. The whale shark then spent the next 20 minutes circling my boat.

Today’s haul wasn’t quite as exciting, but was definitely the second most interesting thing I’ve found accompanying my sea anchor. It was a big bunch of eggs.

There is an orange mooring buoy, about a foot in diameter, that attaches to the apex of the sea anchor a) to help keep the sea anchor at the right depth below the surface, and b) to mark where the sea anchor lies. And in the 24 hours or so since I had put out the anchor, the buoy had acquired a necklace of pale pink fish eggs.

Admittedly, my first reaction was “yuck”, scientific curiosity temporarily overcome by the unappealing prospect of having to scrape them all off. I tied off the buoy, leaving it bobbing in the water while I pulled in the rest of the sea anchor and its lines, which gave me a good half hour to think what to do about the eggs.

I felt really guilty about removing them from the buoy. Fish populations are threatened enough, without me destroying potential new fishy lives. There again, I couldn’t just leave the buoy trailing over the side of the boat until the eggs hatched, whenever that might be. And it wasn’t like the eggs were being tenderly nurtured by their parents like those of an Emperor Penguin. They had just been laid (in a very inconvenient place) and then left to fend for themselves. There really wasn’t any alternative but to dispose of them. I gritted my teeth and set about my
task.

I was quite surprised by the texture of the egg cluster. I had imagined the eggs would be quite separate from each other. Like caviar. But in fact it was a tough mass, held together by connective fibres, a bit like the white connective tissue on a chicken breast. It took a sharp knife to cut through the mass, and it then fell away cleanly, leaving only a very few stray eggs on the rope.

It dropped into the ocean and drifted away. I watched it go, sending a silent apology and a promise to make up for this sad sacrifice by doing what I can to protect many future generations of fishy offspring.

I hope my previous blog didn’t sound too misanthropic. I love human beings, really, I do. I am one, after all, and so are most of my friends. I’ve written more on that subject and was going to publish it as today’s blog, but then the eggs happened. I will post it tomorrow instead.

My poor dear mother has broken her leg – allegedly by slipping while getting on a bus, but I think she needs to come up with a better story. Like “practicing the pole vault for next year’s Olympics”, or “leading the Pamplona bull run”. Terribly inconvenient for her. Please join me in wishing her the speediest of all recoveries.

American Samoa has banned the use of plastic bags. Thanks to John Wasko of Pago Pago for letting me know. He says: “Our island is much cleaner and the turtles are happier.” Another outbreak of common sense. Hurrah Natalie – I loved that quote, so will reproduce it here in case anybody didn’t see it: from the film Kung Fu Panda. ‘Your mind is like this water, my friend. When it is agitated, it becomes difficult to see. But if you allow it to settle, the answer becomes clear’ – Master Oogway.

Vince Perez- happy memories! Wonderful to hear from you, and to enjoy a moment’s nostalgia for the peace and serenity of El Nido Eco Resort in the Philippines. My very best wishes to Leigh, and all at El Nido and Alternergy.

Gregory – you asked if there are any creatures that scare me. Not so far, although sadly I have seen very few creatures at all on the Indian Ocean. As you correctly surmise, nothing can compare with the sheer terror of electrical failure!

Quote for today: What lies behind us and what lies before us are tiny matters compared to what lies within us.
(Ralph Waldo Emerson)

Photos: 1. eggs on the buoy 2. cutting the eggs away