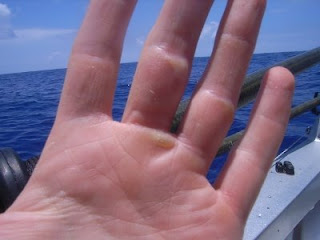 Yet I've rowed the same number of hours each day. That's just the way it
goes. Reward is rarely proportionate to effort. Today I've had to row
just for the workout rather than for the progress.

The problem has been the headwind coming out of the south-southeast –
not a strong one, but enough to grab hold of my big bulky boat and push
her the wrong way. The trade winds are supposed to blow from the
northeast, and weatherguy.com assures me that normal business will be
resumed shortly, but meanwhile my track on the chartplotter is a
complicated squiggle. I row forwards for a while until I get too
tired/hot/sunburned/hungry – so I take a break, and get unceremoniously
dumped back to where I was before.

I can't remember how long Sisyphus was pushing his rock up the mountain
(and my onboard bandwidth doesn't allow me to Google from here, alas)
but it was probably 7 years, or eternity, both being favored periods in
Greek mythology. Either way, I'm hoping my Sisyphean struggle will be
considerably shorter.

Nicole and I have been having some communication problems. We rented a
satellite phone for her because it's much cheaper to call from Iridium
to Iridium than to a landline or mobile. But whenever I try to call her
I get put through to the Iridium messaging service. And ditto she hasn't
been able to call me.

But I was dying to hear how things are going on land post-launch, so I
called her on her mobile, trying not to think about the $$$ rapidly
evaporating. She tells me that there has been a lot of excitement about
the RozTracker, created by Hawaiian R&D company Archinoetics, which has
received extensive coverage in the media.

Also that Ryan Ozawa (Twitter handle "hawaii" which may give you some
idea how much of an early adopter he is) has created a lovely montage of
scenes from the video-stream he broadcast live online on Sunday. I don't
know the full details, but hopefully a member of my shore team can add
some links at the bottom of this blog.

And finally, second in the new season of the Roz Rows The Pacific
podcast with Leo Laporte will go out at 1.30pm PST tomorrow.

And finally finally, even though my oar count on the RozTracker may not
have gone up much – as it's based on an average number of strokes per
mile – you can be assured that I've been putting in my 10,000 a day. So
if you haven't already, please take a look at pulltogether09.org and see
what it's all about. <sigh> At least when you walk 10,000 steps a day
you tend to actually get somewhere…

[photo: blisters not too bad yet – only 3 per hand. If any one can read
palms and tell me how much longer I'll be rowing hard to stand still,
let me know!]