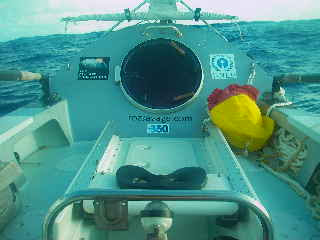 Phew, relieved to log on to email and find I'm not up on any obscenity
charges after yesterday's rather risque rump romp photo…

Today I took a day off from rowing to allow my poor suffering backside a
chance to recover. But the trouble with taking a day off on a rowboat is
that there isn't much to do on a rowboat apart from…. row. It is
definitely not designed as a sunbathing boat, as I found when I tried to
escape from the heat of the cabin to give my bottom some fresh air
therapy.

The main problem is that my deck area is split into thirds, lengthwise,
by the runners for my rowing seat, two ridges which rise up about 6
inches from the deck. The runners (made by Gig Harbor Boat Works, WA)
work admirably for their purpose, which is to give me a nice smooth
slide for my rowing seat, but they do get in the way of any attempts to
find a comfortable place to stretch out. And as for a game of deck
quoits, forget it….

Two other complicating factors:
1. not wanting to lie in direct sunshine, so I was playing a game of
hide and seek with the sun as it moved across the sky and around the sun
canopy.
2. not wanting to lie on the windward side, which catches all the
splashes as waves break against the side of the boat, and I didn't want
to get salt on my chafed skin.

But eventually, with the use of a sarong and a couple of rhino clips to
improvise an extension to the sun canopy, I managed to find a couple of
positions where, with careful deployment of limbs draped across rowing
seat, side decks and/or seat runners, I was able to lie in reasonable
comfort, using the sea anchor (in the red and yellow bag) as a pillow.

It was okay, but not so great that I'd be tempted to repeat the
experience on a regular basis. In fact – even though under normal
circumstances I'd be glad of any excuse to avoid physical exercise (yes,
honestly!) – it was a little frustrating not to be able to make the most
of reasonable conditions. I could have doubled today's mileage if I'd
been rowing – but at least the wind was kindly pushing me in the right
direction so no harm was done.

The evidence of the camera tells me that the strategy may have paid off.
My baboon bottom has now faded to a lesser shade of red, and has
developed an interestingly crunchy, peeling texture, like the aftermath
of a sunburn.

And with that I now resolutely bring an end to all updates on my nether
regions. I had to write about it because it has been the dominant news
story on board the Brocade for the last couple of days, but I don't want
to burden you with any more bulletins on my backside. Enough already!
And on to more elevated subjects….

Just at sunset this evening I saw a most amazingly long flight by a
flying fish. He must have gone about 50 feet. Most impressive.

Thanks for the feedback on names from the Terry Goodkind books. Good to
know how they're spelled – that's the way my brain works. I'd have been
no good in Shakespeare's day, before they standardized spelling!

BTW (and this really is the final, final word on my PITA), I'd like to
reassure people that I do not sit directly on that hard, black plastic
seat. I have a cushion provided by Bottomsiders, covered with a seat
cover made from Packtowl quick-drying fabric, which I rinse at the end
of every rowing shift as well as washing my skin. Please also know that
I have a huge and comprehensive first aid kit, and an attentive doctor
on call 24/7, so if there are any signs of infection I have ample
resources to deal with it.

And in answer to the question about previous botty issues – on the
Atlantic I had problems with saltwater sores, which are more like
pimples. Ditto but much less bad (due to better seat strategy and tea
tree oil) between San Francisco and Hawaii. This is the first time I've
had such a rash/chafe. I can only think it's due to the new factor of
intense tropical heat. Just when you think you've got it all figured
out….

Thanks for all the tea and sympathy and humor around my damaged
derriere. All much appreciated!