Following on from my conversation with Ted Rau a few weeks ago, when I promised you more on sociocracy, I’m delighted to introduce you to the work of John Buck and Monika Megyesi from Governance Alive.

John and his partners have introduced hundreds of businesses to the power of sociocracy, bringing new levels of efficiencies, engagement, connectedness, and satisfaction. An expert in the synthesis of social technologies like Beyond Budgeting, Open Space, Sociocracy & Agile, John has co-authored books such as “We the People: Consenting to a Deeper Democracy,” and “Company-wide Agility with Beyond Budgeting, Open Space & Sociocracy”.

Monika Megyesi started out studying human anatomy and training as a nurse. She was struck by the ability of human bodies to heal themselves, and saw how self-healing functions could be brought to the human systems surrounding her. She has a business degree from the University of Maryland, she co-founded the Entrepreneurial Partnership of Greater Washington, and she has a Masters in Negotiations and Conflict Management at the University of Baltimore. Her motto and driving inspiration is summed up in the words “Awaken to Life: You matter! You belong!”

In this conversation, we talk about sociocracy, structures, feedback loops, vulnerability, conversations in rounds, consent and consensus, embodied decision-making, eyeballs, yin and yang, circles and lines, and – something that was a very alien concept to me in my corporate career – meetings that people look forward to.

I feel so encouraged that there are these powerful social technologies that can really help people to thrive in their work. I absolutely believe that we need all hands on deck if we’re going to ride the waves of change, and sociocracy can make sure we’re all crew, no passengers, while creating more resilient, robust organisations better suited to the uncharted waters ahead.

And our archive of conversations – with Charles Eisenstein, Tim Jackson, Jude Currivan, Bill McKibben, Sharon Blackie, Ted Rau and Paul Hawken are available for free on Spotify, and now also on Apple Podcasts! 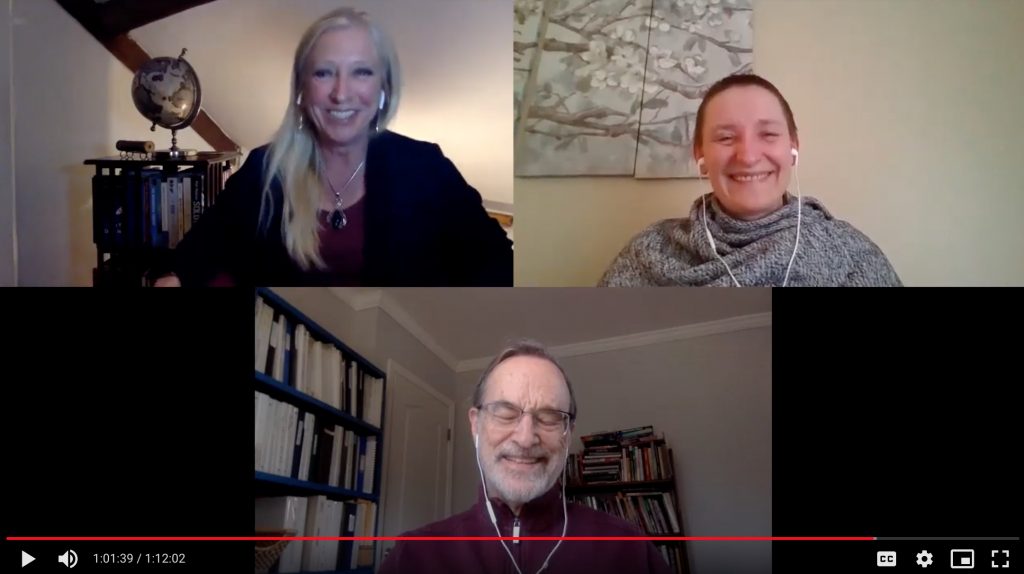 John: In any typical company, you can escape the feedback. You can be a manager that says, I will listen to your opinion. And then of course, you turn around and make whatever decision you want. Because you’re only getting input, you’re not getting feedback.

John: I did a Master’s thesis in which I studied Dutch companies that were using sociocracy and was able to provide solid data that that the level of organizational commitment of a worker in a Dutch sociocratic organization was statistically significantly higher than the average Dutch worker commitment to the organization they were working in.

Monika: I happened to be born in a quite oppressive dictatorship in Romania, as an ethnic minority. So I had experienced the jaws and claws of oppressive regimes. Because of that experience, my journey has become about finding building structures that can be steered by the voices from within.

John: Structure very much trains you to behave the way is optimal for that structure. And so people find as they operate in a structure that promotes openness and transparency, that they become more that way.

John: We’re not trained that way (sociocratically). In school, we sit in rows, not in circles, and you’re raising your hand to get attention, or trying to avoid attention or whatever. And so just that simple change is a change in structure.

Monika: An objection improves a proposal. It helps you move forward in the way that the group wants. A personal preference is simply liking one alternative more than the other. And when people present personal preferences as objections, the group often feels held hostage by that one person. And so using objections that are reasoned, and connected to the aim, not only ensures equivalence in the group – that everybody has the same chance to have an input in the process – but it also focuses the group into the direction that they want to go.

John:  If I’m going around saying, does anybody have an objection, and somebody says, no, no objection. I say, okay, that’s an objection. And I go back to that person. And I say, wait a minute, why was your mouth and your body disagreeing with each other? what’s going on? And that, that allows us to connect way down to the base of our brain where there’s this old lizard brain back there that actually has maintained control of decision making, despite all this cerebral cortex stuff.

John: A lot of consent decisions are training people to just check people’s eyeballs. Ask, anybody have a problem with this? And if you see the eyeballs, you’ll know immediately whether they have an objection.

Monika: We use what we call semi-autonomous circles… Each circle has an aim. And within accomplishing that aim, they have full autonomy – on who does the work, how they do the work, when they do the work. As long as what the circle offers to its environment, to its customers, to other areas of the organization is delivered, the team or the circle itself decides how they go about delivering it.

John: The best way to measure whether a circle-building was run well, was that the people feel more energized at the end of it than they did the beginning of it.

Monika: So in sociocracy, we use both structures, like yin and yang. So coordination is happening not only through the double links in the circle structure, but operationally in the linear structure. And this beautiful kind of dance and shift and knowing in which structure we are, and for what purpose, is the learning curve, the paradigm shift that both individuals and organizations need to go through.

Monika: The interesting place that we are finding ourselves is in transition. And transitions are these liminal spaces where the rules are not clear. Anything can happen. We are still, in many ways anchored and dependent on the old world. At the same time, we are starting to create this new world. So I think social technologies like sociocracy, agile, open space are to me definitely the ways to go.

John: The basis for running a company is no longer the golden rule, ie who has the gold makes the rules. It ends up being consent, which is fairly revolutionary.

John: In some ways, what we’re talking about is not new. The idea of electing your boss in the US was commonplace until the 1850s – men used to elect the officers in the army. That was the frontier way of doing it. And that disappeared with the Civil War and the rise of corporations and all that those were based on the golden rule. But that’s the authentic US way of doing things, is to elect our leaders, and so we’re trying to in some sense to bring that back.

John: You should start organizing society at the very basic neighborhood level. And that doesn’t mean 50 or 100 houses, it means maximum 30 families. And they get together and they make decisions together. And I’m writing a book right now called Governance From Below. Can children lead the way? It’s about how actually, we should be training children to do this, because they get it a lot quicker than adults do. And so, then you have 30 families, or 30 Children’s Parliaments, then they all elect representatives to a next level Children’s Parliament. And then you get 30 of those and you elect the next level, and so forth up.

Monika: Bruce Lipton is a cell biologist. And he came up with this concept of fractal evolution, of how organisms start as individuals, then they form communities until the community learns how to function as one unit. They build a membrane around it, like for example, bacteria builds biofilm. And then when many of these communities come together, they form a higher level organism, which becomes again many communities able to function as a single unit and that’s an amoeba. So if we look at humanity and humans, I feel that we have pretty much completed the evolution of the human being. We’ve been experimenting with communities, like families, tribes, villages, kingdoms, countries. More and more, we are becoming globalized. So what I see is for us to be able to function together, coexist, think, decide, feel together as one humanity that is synchronized with our resources and with the Earth that we live in.

Monika: If you ignore that you’re low on oil, the car is going to break down, you’re not going to get to the grocery store after a while. So we can ignore the flashing oil light. And we will pay the price in similar ways with our Earth, we can continue ignoring the signs and we will definitely pay the price. And we can learn to pay attention to the signs and build that feedback into the decisions that we make.

John: My favourite animal for that is the octopus, because it’s a multi-brain entity that has a multi-brain mind. I think we’re heading there. But it’s not clear how it’ll all come out. And it’s a time of great experimentation that we should all be having fun with.

Photo by Ahmad Odeh on Unsplash