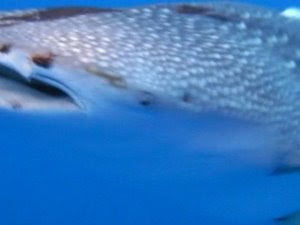 From despair to delight – after yesterday's gloom and doom in the
doldrums, today was an absolute corker of a day. The highlight, without
any shadow of a doubt, was a close encounter with a whale shark.

I woke just before 7am, just as dawn was starting to lighten the sky, in
time for my regular Sunday phone call with Mum. I went out on deck for
morning ablutions and discovered that the wind was blowing briskly from
the north – very good news indeed. But the sea anchor was still out, and
would reduce my boat's speed as I was blown south. So I made a quick
call to Mum to tell her I'd call her back in about half an hour once I'd
brought the sea anchor in.

Mum was probably thinking I'd fallen overboard by the time I finally
called her back an hour later. "Mum," I said, "Sorry it took me a while.
Can you do a quick Google and tell me what a whale shark looks like?"
She did a swift search and said, "Wide mouth, flat head, spotted
patterns on the back…" "That's the fella!" I said.

I'd been out on deck and had just pulled the sea anchor on board. The
tripline was already coiled in its bucket, and as I started pulling in
the main line I became aware I was not alone. A big, blunt, speckled
head surfaced from the water just inches away from me. I glimpsed a
gaping, gummy mouth that took up most of the front of the head. A dorsal
fin. A pointy tail. The creature was about 8 feet long, with gorgeous
speckled markings on his skin.

I grabbed my video camera from the cabin and rushed back before he
disappeared, but I needn't have hurried. The gentle giant did lap after
lap of my boat, while I dashed from side to side in time with his
leisurely circuits, trying to film him. I didn't get any truly great
shots – I really needed a wide angle lens to capture him, because he was
just too close to me. My hand kept brushing his skin as he passed by. I
thought about jumping in – it was obvious from his lack of teeth that he
wasn't a shark of the man-eating variety – but I thought that a naked
woman suddenly dive-bombing him might scare him away.

To be honest, even if I had got some better shots from the front, a
whale shark's face is not his fortune. It's the kind of face only a
mother could love. The mouth takes up most of it, and it's less a mouth,
more of a cavern. He's a filter feeder so I suppose a big gob is part of
the job description. But it doesn't make him especially photogenic.

But photogenic or not, I was hugely, giddily, excited to see him.

I would like to thank the local fauna for making themselves so very
available for photo calls. I'm not the world's most observant person,
and it's not easy to spot wildlife from the low vantage point of a
rowboat, but the sea creatures seem to be making a point of coming up
very close so even I can't possibly fail to see them. And then they
cruise around me repeatedly while I ineptly try to catch a few shots of
them with my video camera. It's as if they're coming to visit and to
welcome me to their kingdom – and I appreciate their good manners and
hospitality very much indeed.

[photo: Sorry this picture is a bit blurry, but it's the best shot I
managed to get of his face. I've got some other pics that show off his
beautiful markings – I'll post one tomorrow.]

The day continued to deliver good things. While I was talking with Mum
on the phone there was a double rainbow. The northerly wind moved around
to the east where it stayed for the rest of the day, allowing me to make
some progress in a blissfully straight line south. I crossed over 5
degrees north – another milestone on the way to the Equator. The
afternoon was sunny, bright and glorious – a welcome change from the low
grey skies of the last few days. It's all good.

Q: How long does it take you to pull the sea anchor back onboard?
A: Normally about half an hour to get it back on board – of which about
5-10 minutes is retrieving the anchor and 20 minutes is getting all the
ropes stowed. But when there's a whale shark involved it takes a lot
longer!

Weather forecast, courtesy of weatherguy.com – with special thanks to
Rick for this additional forecast at my request

As of Sunday, 18 July 2009. As mentioned in previous reports, wind
predictions will be with an added level of uncertainty due to the
naturally occurring spatially and temporally variable conditions in the
equatorial regions. Most forecast models are tuned to the mid latitudes
and do not handle the equatorial regions very will. There is also a lack
of real time, qualified ship observations that populate the models. To
mitigate the model uncertainty and lack of data, measured data from
satellites complement other forecast aids. There is still an increased
uncertainty which you are experiencing.

The good news is you are almost through the southern boundary of the
ITCZ. There is minimal convection south of 05N. The other good news is
as you cross 05N there should be increased easterly flowing current. Any
movement eastward is good for an equatorial crossing should you decide.
And a west wind also pushes you east for better line up on potential
landing spots in the southern hemisphere. I was pleased at your slight
movement eastward from Thursday's position.

The combined affects of how variable wind direction and speed and ocean
current affect your boat remains to be seen. All you can do to keep your
chin up and row with extra determination and you WILL get through it.
You have been through worse before and came out on top. So I know you
can do it!