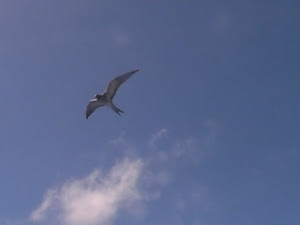 It's crunch time. I need to decide which way to turn: Tuvalu or Tarawa?

Originally I set my sights on Tuvalu – mostly for environmental reasons.
It is one of those unfortunate countries being most impacted by rising
sea levels, and has already started to relocate its population to New
Zealand. What better way to illustrate the impact of climate change?

But unfortunately Tuvalu has significant drawbacks apart from the
obvious one that it is disappearing. With a population of only 10,000
and limited infrastructure, it is difficult to get to or away from, and
the chances of finding anywhere satisfactory to store my boat are
minimal.

Tarawa, on the other hand, while hardly a seething metropolis, does have
reasonably good flight schedules, and rather more in the way of
infrastructure. It is also where Jason Lewis and his crewmate dropped in
on their way from Hawaii to Australia, which gives me some faint
reassurance that winds and currents might allow me to get there.

Because this is the deciding factor: which is the safest option
navigationally? Both are tiny targets in a very, very big ocean, and if
I miss landfall it's a long way to the next possible pitstop. The worst
situation would be to dither and procrastinate and end up falling
between two atolls. That would be just plain embarrassing, not to
mention extremely inconvenient.

It would have been nice to get south of the Equator on this leg, but at
1 degree and change north of the Equator, Tarawa is at least below all
the tricky stuff of the ITCZ and the counter current – just about –
hopefully leaving me a clear run for Stage 3. So I may just have to
celebrate crossing the International Date Line on this leg, and leave my
Equator crossing until next time around.

So hopefully by this time tomorrow, after a final round of consultation
with weatherguy, I will have a decision.

[photo: This morning a load of these fellas were chirping noisily near
my boat, swooping for fish. I see them most days, and I've never yet
seen one catch anything. But they seem to be having a good time anyway.]

Today was a slightly odd day weatherwise. I was woken by the sound of
rain pounding on the cabin roof, and treated myself to a lie-in while
several showers passed by. I don't mind if a shower soaks me once I'm
out and rowing, but it's not nice to be on a wet seat cushion from the
get-go. For most of the rest of the day there was barely a breath of
wind, and when it revived it was coming from a new direction – northeast
rather than the east. This was rather disorienting – I've got so very
used to the east trade winds.

It was this that focused my mind on the Tuvalu/Tarawa decision. If I'm
about to enter the mysterious world of the ITCZ, I need to be absolutely
sure which way I want to go. If the weather is going to be all over the
place, somebody around here needs to know what's what.

Quick bit of blowing my own trumpet – Nicole tells me that in this
month's edition of Outside Magazine (American publication, very popular
with all kinds of outdoor enthusiasts) I have been chosen as one of the
Top Five Twitters, alongside the likes of Lance Armstrong and Michael
Phelps. Honored, I'm sure.

But don't worry – I won't get big-headed. Two things keep stop me
growing out of my hats.
1. My Dad. He died 5 years ago, but I can still hear his voice.
Like any true Yorkshireman he was never over-impressed with anybody's
achievements, his own or anybody else's. Or not that he let on, anyway.
2. The ocean. The Pacific couldn't care less about Adventure
Twitterers, 8-time Olympic gold medal winners or 7-time Tour de France
winners. To the ocean, we're all just flotsam.

Eco Champ of the Day:
Ocean Girl: "Our household had been on reduced plastic bag but after
following your blog, we moved to NO plastic bag completely."
FANTASTIC!! Thanks, OG. Let's hope after reading this a few other people
will do the same.

Joan – thanks for the tips on viewing the eclipse. Hmmm, the arts and
crafts locker – let's see!

And thanks for all the other great comments and gruesome grub stories –
all very entertaining!

Q: What is your degree from Oxford in Roz?
A: Jurisprudence (aka Law). But in fact I really specialized in rowing
and drinking beer.

As of Monday, 06 July 2009. The easterly trade winds have turned more
northerly still around the 15-20 kts range with periods of lighter
winds. Wind speed gradually abates beginning 08July to become 5-12kts by
10July. As the winds abate they shift to ESE-SEerly direction, which may
make it harder to row southwards in headwinds. Seas abate to 3-5ft.

ITCZ: The Inter-Tropical Convergence Zone (ITCZ) has quieted since last
report so maybe the passage through will be less dramatic. Convective
clouds have become fewer. The northern ITCZ edge has become diffuse but
the axis is along 170W to 180W between 03 00N and 04 00N. As of this
morning, winds south of 08 30N to the Equator between 170-177W were from
5-17kts with only isolated rainshowers of moderate strength.

Ocean Current: Still looking for the current to become Eerly flowing at
about 06 00N in the North Equatorial Counter Current. We will see how
this can aid your passage across the Equator.