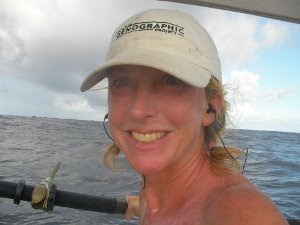 Ferocious tropical sun, roaring wind, steep breaking waves. Today was
not an unusual day, but nor was it my favorite kind of day for rowing.
It was too windy to put up the sun canopy, which in wind speeds over 20
knots flaps around and biffs me around the head. So without the canopy I
was exposed to the full force of the sun. And the steep contours of the
waves made it difficult to get a good connection between oar and water,
exacerbated by a strange phenomenon: The sound of the wind and waves
seem to send a message to my limbs, saying – bad rowing conditions,
hence bad rowing.

I've found from experience that on days like this the best way to avoid
rowing like a moron is to insulate myself from the elements as much as
possible, ignore what the conditions are doing, and put my body on
autopilot. It rows much better without my brain interfering.

I do this by making like a teenager. I pull my baseball cap down low and
stick the earbuds in and plug myself into my iPod. Apologies to those
purists who would have me commune with nature in all her moods, but in
present circumstances I feel justified in doing whatever gets me through
the day.

Today, my choice inspired by podcast partner Leo Laporte's vacation
destination, I chose the audiobook of "Lost on Planet China" by J
Maarten Troost. And he has thoroughly put me to shame. I absolutely take
my hat off to him as the champion of intrepid eating. He succeeded where
I wimped out and failed. When faced with a potential squid dinner oozing
to death on my deck, I discarded the notion as too gross to contemplate.
Not Troost.

Throughout his travels in China he struggled with the language barrier,
especially in restaurants. On one occasion he finds himself presented
with a bowl full of 10 live squid. He contemplates his lively dinner. He
asks the waitress what he is supposed to do. She tells him. He braces
himself, wondering if he can do it. Yes, he can. One by one, he takes
the live squid out of the bowl of water and pulls their heads off, then
dips their bodies in vinegar and eats them. Every last one. Leaving just
a pile of squid heads on the side of his plate.

Wuuuhhhuuuuu. Eeeewwwww. Eeeeessssshhhh. I thought I was a brave eater,
pickled jellyfish being probably the weirdest thing I've ever eaten. But
raw live squid absolutely trumps that.

This makes for sobering reading. It's clearly essential that any global
initiative on CO2 emissions needs the buy-in of China and the other
rising industrial superpowers. But that is going to require some
seriously impressive feats of diplomacy in Copenhagen this winter. Can
it be done? I think it can, but will need an approach that shows empathy
with China's economic goals. I am no diplomat or politician, but it
seems to me that all countries need to find a vision of a sustainable
long-term prosperity based on sustainable long-term energy sources. It
would be challenging, but very impressive, if the developed countries
can hold hands with those still developing, and move together towards
that vision of the future, working with them to solve the problems that
affect us all.

An afterthought on J Maarten Troost. Now there is a man I'd like to get
on the end of the phone right now. He knows all about the islands of the
Pacific, having lived on several of them, including Tarawa and Tuvalu
(presumably Funafuti). If anybody in the world can tell me which of my
potential destinations has the best beer, I'm sure it would be him – and
probably a wealth of other more essential information besides. One of
his earlier books was called "Getting Stoned With Savages". I wonder if
he'd be amenable to Getting Phoned By Savages …

[photo – earbuds in, and the "ocean feral" look]

Today I was rowing straight down the pink line – the line on my
chartplotter that leads from where I am now to Tuvalu. But as I get ever
closer to the ITCZ and the NECC, things could still change. We're busy
researching all aspects of our options right now.

Sandy – thanks for the mention in the blog roll. Not often I find myself
in a list alongside Demi Moore and Angelina Jolie!

Michelle – thanks for the offer of the house in Hood River. It might be
a bit too tempting to socialize instead of write, but otherwise that
would be perfect. Can I let you know nearer the time?

Special hello to Sandra and Ian Williamson in Oxford – glad to hear
you're well and Facebooking! Ahhh, happy memories of college days,
especially the beer cellar!

Q: What brand electric watermaker would you recommend on an ocean
crossing?
A: I use the Spectra Ventura 150 – still the same one I used for the
Atlantic voyage. I run it for about 45 mins a day and it produces enough
to fill a 10 liter jerrycan and a bucket. Works great.

Q: Why are you a Mac on land and a PC at sea?
A: I prefer the Mac, but when I did the Pacific Stage 1 I needed a PC to
interface to the Iridium satphone so I could upload blogs. There is now
a product called OCENS that allows a Mac to talk to Iridium, but I'd
still rather trash a PC than risk my precious Macbook!

Q: Do you see many airplanes overhead?
A: No, none at all.

Q: If you had a can or bottle of beer couldn't you attach it to a line
and sink it a 100 feet or so to chill it? Would the water temp 100 feet
down or more be much colder than the surface water temp?
A: Oh, I'll just go hop over the side and check….

As of Monday, 06 July 2009. The easterly trade winds have turned more
northerly still around the 15-20 kts range with periods of lighter
winds. Wind speed gradually abates beginning 08July to become 5-12kts by
10July. As the winds abate they shift to ESE-SEerly direction, which may
make it harder to row southwards in headwinds. Seas abate to 3-5ft.

ITCZ: The Inter-Tropical Convergence Zone (ITCZ) has quieted since last
report so maybe the passage through will be less dramatic. Convective
clouds have become fewer. The northern ITCZ edge has become diffuse but
the axis is along 170W to 180W between 03 00N and 04 00N. As of this
morning, winds south of 08 30N to the Equator between 170-177W were from
5-17kts with only isolated rainshowers of moderate strength.

Ocean Current: Still looking for the current to become Eerly flowing at
about 06 00N in the North Equatorial Counter Current. We will see how
this can aid your passage across the Equator.