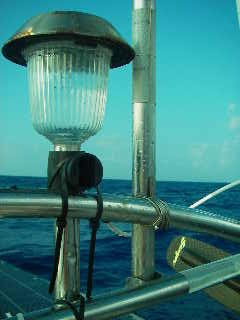 One of the joys of being on the open ocean is that I am far outside any
legal jurisdiction. British. American. Even my mother's. Of course,
opportunities for taking advantage of this freedom are rather limited.
If I decided it was okay to break all kinds of laws (which obviously it
isn't), there's not much I could do about it. No shops to shoplift, no
restaurants to do a runner from, not even any "Keep off the grass" signs
to ignore.

In fact, I'm a very law-abiding citizen. So much so that I even have my
own set of ship's rules – although these are very flexible and subject
to a large amount of personal discretion. After all, the captain has the
final word.

1. Always empty the bedpan over the downwind side of the boat.
Always. No exceptions.
2. Listen to audiobooks only while actually rowing.
3. Keep rowing until the Raillight comes on (it comes on
automatically at dusk – although dusk often seems a long time coming) –
see photo
4. Keep cabin hatches closed at night – just in case of rogue waves
5. Clear the decks before retiring for the night – sun canopy
furled and stowed, all other objects secured or put away. Any objects
left unsecured are likely to be gone by morning.
6. Blog every night before bed. No excuses, short of death – of
self, satphone or computer
7. No whingeing, whining, grumbling or bitching – although
enthusiastic and creative swearing is actively encouraged for
therapeutic purposes
8. Speed limit of 5mph strictly enforced (yeah, right, like I could
go any faster)
9. Strictly no consorting with members of the opposite sex (chance
would be a fine thing)
10. And of course, no smoking, drinking, or disturbing the neighbors
at closing time.

36 nautical miles today, according to the ship's log. Good stuff!

Tonight I took a photo of my bottom – the only way I could see what was
going on down there. Absolutely horrifying. I don't know whether to be
gratified or aghast that it looks even worse than it feels. Chafed
doesn't even begin to describe it. I definitely need a bum transplant.

My stereo is on the blink. This is rather annoying, given that I am less
than 3 weeks into my voyage and it hasn't even been a wet one, so
there's really no excuse. It now regards the on/off and play/pause
buttons as purely advisory. Sometimes it takes notice, sometimes it
doesn't. With some coaxing I can usually get it to play, but it seems
its days may be numbered. Not impressed.