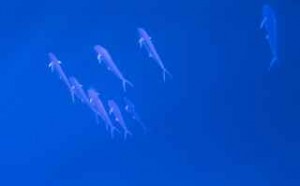 Some people have asked me whether, having rowed on the world’s three major oceans, would I be able to tell one ocean from another if I was plonked blindfold in the middle of one of them. I’ve been thinking about this, and I think I could make an educated guess, with a better than 33% chance of getting it right.

It’s not so much the ocean itself that would give me a clue. Maybe the Indian Ocean is a bit saltier, the Pacific a bit calmer, the Atlantic a bit colder. Nor would it really be the weather – this varies so much according to season and latitude.

It would be the wildlife that would be the biggest clue. I remember the Atlantic mostly for flying fish, which regularly landed on my deck. I’ve seen them on the other oceans, too, but not in such numbers. The Pacific was, of course, memorable for the booby birds, which made such a right royal mess on the fore cabin roof when they moved on board for several weeks.

The Indian Ocean I will remember for the beautiful storm petrels that have been my constant companions, and the “chaps downstairs” – the dorados that perform backflips and bellyflops for me all day long. I watched them for a while at dusk tonight, as they swam laps underneath my boat. One, in particular, would turn on his side as he emerged from beneath the hull, to show a bright flash of silver before he returned to his normal swimming position and reverted to blue. They really are magnificent.

What concerns me more than the difference between one ocean and another is the difference between the oceans now and how they were a hundred years ago. I’m willing to bet they had a lot more fish – of all kinds – in them back then. Whales, sharks, and cod are only the most conspicuous examples of the general depletion of the oceans. When I was at TED Mission Blue in 2010 there was much talk about the need to expand marine protected areas to protect fish and other oceanic life – before it is too late. When I get back to dry land I’ll be checking in with the Blue TEDsters to see what I can do to help.

The wind has died right down today. I wish I could say that this has made conditions more comfortable, but in these conditions the boat tends to “wallow”, rocking from side to side, whereas on larger waves she tends to rise and fall but stay relatively level. The rocking is not soothing like a baby’s crib – in fact, it kept me awake quite a lot of last night. Looks like we’re in for another good wallowing tonight.

Daniel – great to hear about you riding your bike to work, and the many benefits it brings you. You find money on the road almost every day? I’m in the wrong job – I’ve been looking for over three months and not found a penny!

Stan – it would be great if we could change human nature so that we would all do the “right” thing, but in the real world, I agree with you that this is unlikely to happen. We do indeed need to change the way that our society looks at waste. In Britain, many years ago, before rubbish trucks came along, there used to be “rag and bone men” who would collect rubbish in their horse-drawn carts. Rags and bones were literally all that was left – and no doubt the bones would have been well boiled for soup before they were tossed out. Very different now.

Claire in LA – thanks for your kind words. Let’s hope the letter helps. A copy will go to Boris Johnson along with other letters coordinated by Greener Upon Thames

Quote for the day: Doing something is a damned sight better than being someone. (Roy Hattersley, British politician)